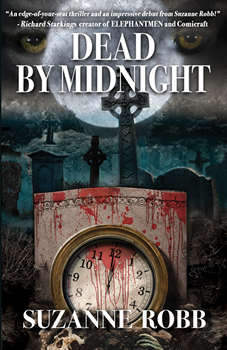 After Zach Harris is attacked by a wolf, the most bizarre consequence isn’t that the police suspect he’s the serial killer… or that he’s growing hair in funny places, wants to mark his territory and chase rabbits…not even that he’s falling for Lucy Lane, a tenacious reporter who can expose his secret. What is truly strange is the wolf who bit him now turns into a man during the full moon.

Sucked into a murder investigation, Zach races against the clock while the Moonlight Killer taunts the police. As the pickled body parts pile up and one of Logansville’s finest goes missing, Zach forms a strange alliance to avoid life in prison orange, catch the real murderer, and try to save the woman he loves.

Suzanne Robb recently took some time to discuss DEAD BY MIDNIGHT with The Big Thrill:

I hope they smile and see there are many ways to tell the same story in a different way. I also hope they take away a smile and a few chuckles.

I think it creates a new way of looking at an old mythology. A “what if” scenario that has not been done before. And that is not to toot my own horn, the concept has not been done, so it will either be really cool or really terrible…

How much I love to write in this genre and how easy it was to fall in love with the characters.

Red herrings and hints everywhere that might take a reading or two to pick up on.

Christopher Moore because I love his humor and the way he weaves a tale. Jasper Fforde because his ability to world build is amazing. Gregory Maguire because his stories suck you in from page one.

“A fun and playful romp through a dark forest of supernatural shenanigans. Only the dark forest is a private gated community in New Mexico. And the shenanigans include werewolves, vampires, a serial killer, and jars of pickled body parts”. – S.G. Browne, author of Breathers and Lucky Bastard

“An edge-of-your-seat thriller and an impressive debut from Suzanne Robb!” -Richard Starkings creator ELEPHANTMEN and Comicraft

“Suzanne Robb is a natural storyteller. With Dead by Midnight, she has developed into the kind of writer whose work, in all of its addictive glory, will be called “effortless,” but that is reductive. Dead by Midnight is a triumph of craft, and represents the next evolution of an utterly unique voice in genre fiction. Suzanne is singularly talented at crafting tales of the macabre, and this novel reinvents a monster we think we know with a one-of-a-kind story, her trademark clever dialogue, and characters that will stick with you long after you’ve read the last page.” – Pat Shand (Robyn Hood) 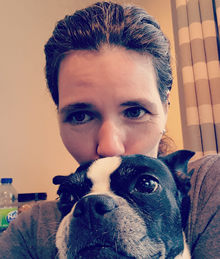 Suzanne Robb is the author of DEAD BY MIDNIGHT, the Z-BOAT trilogy published by Permuted Press and CONTAMINATED published by Severed Press. She is an Active member of the ITW and an Affiliate member of the HWA. In her free time she reads, watches movies, plays with her dog, and enjoys chocolate and LEGOs.

To learn more about Suzanne, please visit her website.