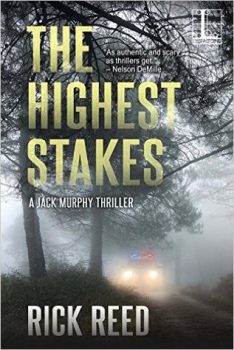 Detective Jack Murphy is back—on the trail of a criminal mastermind who kills for profit and tortures for pleasure.

In Jack Murphy’s experience, the killers who blend in are the hardest to catch. But none are as elusive—or efficient—as Mr. Smith. A man of average height, weight and build, Mr. Smith is as ordinary as his name. Which makes it easy for him to get close to his targets. To kill without conscience. To use every weapon at his disposal to raise the stakes in a global game of terror and death. Mr. Smith is no ordinary killer. But Jack Murphy is no ordinary cop . . .

Author Rick Reed took time out of his busy schedule to discuss THE HIGHEST STAKES with The Big Thrill:

This book is about political power and the lengths to which some will go to achieve it. I don’t want my readers to think I’m against all politics, or that I have known someone like the politician in this book. Quite the opposite. I have found most of them to be honorable and dedicated to their work. But corrupt makes a better theme—don’t you think?

The Deepest Wound is the third novel in a series of thrillers involving Detective Jack Murphy and his detective sidekick, Liddell Blanchard aka/Bigfoot. Two more novels will be released soon, THE HIGHEST STAKES (#4) on October 25, 2016 and The Darkest Night (#5) on April 16, 2017. Novels 4 & 5 are available for preorder now. This series takes place in Evansville, Indiana, with #5 located in Iberville Parish, Louisiana. Taking a page from John Sandford’s book, I want my characters to have a broader reach to include other locales and the readers in those towns, states.

I originally wrote this book in 1992 on a state of the art, IBM computer with—wait for it—a whopping eight meg of memory! I wrote this as therapy caused by the horrors of my job as a police detective. I had no intention of publishing. In 2009 I wrote a different novel, THE CRUELEST CUT, for Kensington and used the characters I had developed in 1992 (or a version thereof). Although Kensington had previously published my true crime book (2005), and the first two of my fiction novels (2009 and 2010), rewriting The Deepest Wound as the third fiction novel for Kensington was the first time I considered myself an “author.” I discovered it is not easy writing a series.

I believe I answered that in the above question. This book was actually the first full length novel I had ever attempted. I wrote it for therapy, and as a challenge to see if I could. I was surprised at the direction the characters took. The destination didn’t change much, but the roads taken by the story were surprising even to me.

The First Circle by Alexander Solzhenitsyn taught me how to give characters their own voice. Nelson DeMille taught me how to use humor mixed with the right amount of danger. John Sandford taught me to write a series. These are only some of the authors. There’s John Lutz, Gregg Olsen, John Gilstrap, Kevin O’Brien, and I could go on and on about tools I discovered with each of these and many other authors. I have to mention Donald Bain of Murder She Wrote fame. He taught me that any number of murders can take place in a small village. Ha ha.

“As authentic and scary as crime thrillers get.”
—Nelson DeMille

“Everything you want in a thriller: strong characters, plenty of gory story, witty dialogue, and a narrative that demands you keep turning those pages.”
—Book Reporter

“Reed thrusts the boundaries of his story forward to bring us along on a ride we won’t soon forget!”
—Suspense Magazine 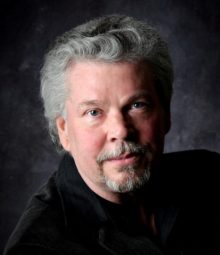 Sergeant Rick Reed (Ret.) was a member of the Evansville Police Department and Vanderburgh County Sheriff Department in Indiana for 30 years. During that time he served as a hostage negotiator, handwriting expert, and lead investigator on numerous serial rapist, cold cases and homicides.

Reed’s acclaimed book, Blood Trail, is the true account of one investigation that unearthed a serial killer, Joseph Weldon Brown, who claimed the lives of fourteen victims. After imprisonment, Brown strangled his cellmate and was sentenced to a second life-without-parole sentence.

Reed is the author of the Detective Jack Murphy thriller series. The Cruelest Cut and The Coldest Fear were re-released in March 2016, The Deepest Wound was released in April 2016, and his new book, THE HIGHEST STAKES, will be released October 25, 2016.

Reed is currently teaching Criminal Justice and writing. He lives with his wife, Jennifer, and their critter family, Belle and Lexie.

You can reach him through his website, or through www.KensingtonBooks.com.