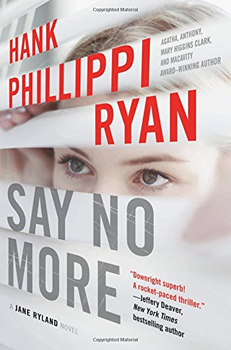 Hank Phillippi Ryan spends her career—both as an Emmy award-winning TV journalist and a New York Times bestselling novelist—getting people to talk. The subjects of her interviews, her characters. Herself.

So when she witnessed a hit and run accident a couple years back and found herself testifying to the driver’s identity, an unfamiliar feeling washed over her—a chilling emotion that not only made her uncharacteristically clam up, but also inspired her latest Jane Ryland book, SAY NO MORE.

“I began to wonder, what if my testimony puts my life in danger?” she says. “And my whole perspective shifted. One of the biggest road blocks to a journalist’s success is when the interviewee doesn’t talk—and here I was the one staying silent. That led me to think: can silence be a weapon?”

SAY NO MORE begins with Boston reporter Jane Ryland in the same position—witness to a hit and run that throughout the course of the taut, page-turning novel turns out to be the collapse of an alibi in connection with Jane’s current big story, a series of campus rapes that appear to be cloaked in a devious cover-up.

Adding to the conflict for Jane is pressure to “say more” to her long-standing love interest, homicide investigator Jake Brogan. Where does she draw the line between journalism and law enforcement?

The sex crimes at the heart of SAY NO MORE could also be considered ripped from the headlines—particularly in light of issues raised in the upcoming U.S. presidential election—but Ryan says the timeliness of this book is a little bit luck, and a lot about understanding the mindset of the public and what will matter.

“As I started writing my novel, there were more and more—shockingly more—discussions about campus sexual assault in the news,” she says, noting that her research netted statistics that alarmed and disturbed her. For instance, she learned that one in five women in college are sexually assaulted, generally within the first week of school. “They call it the Red Zone.”

Ryan’s acute investigative instincts went on high alert, and she began to think about the lengths a college administration would go to in order to keep these instances of campus rape out of the public’s sphere of knowledge.

“For the first time in her career, Jane understands what people mean when they say, ‘I don’t want to get involved,’” Ryan says. “And the conflict for Jane as a reporter is that she has to make a critical—pivotal—decision about whether or not she should say more about what she knows—and what will happen if she does.”

Ryan effectively provides an intimate behind-the-scenes glimpse into the real-life mechanics—and emotions—of a working investigative reporter. Something the average person doesn’t think about when the final clip rolls across the TV screen or is printed in the paper.

“Viewers don’t know whether I was afraid, how I felt about the people I was interviewing, my personal opinions about the story, whether I wish it was an assignment I didn’t have,” she says. “The key to being a good journalist is being a good storyteller, writing about what’s compelling. In my books and in my reporting, I show people a world that’s fascinating.”

As would be expected, the investigative reporting parts of this novel—and all in the Jane Ryland series—is spot on. But Ryan takes special care to ensure the police procedural aspects are just as authentic.

“The process is the same,” she says. “The goals are the same: define the question, follow leads, pore over documents, talk to people, talk to people some more. And more. Piece the puzzle together.”

It’s also the same method Ryan uses to write each of her novels, acknowledging that she is never quite sure where the characters will take her, and often it isn’t even until the end that she fully understands how the mystery is solved.

“Starting a new book is exactly like starting a news story,” she says. “When I begin the journey, I don’t know the end—if I did, it wouldn’t be a new, exciting story. I’m surprised every day, and when I get to the solution, I’m delighted.”

Particularly since the road is bumpy, twisty, and peppered with clues that are sometimes placed without a consciousness. Being in that “writerly zone” is what fuels Ryan’s adrenaline, her drive to tell good stories, important stories—stories that change lives and change laws, and in all cases, never fail to entertain.

“I never lose sight of that,” she says. “Entertainment comes first. But if I can take some critical element from real life—ripped from my own headlines—and help people see the world in a different way…that’s my goal.” 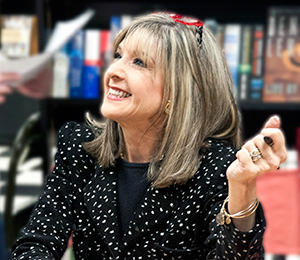 To learn more about Hank, please visit her website.