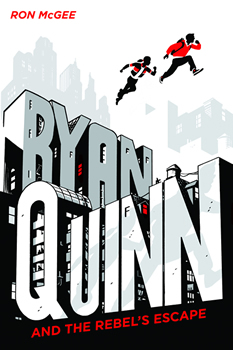 Ryan Quinn hopes his traveling days are over. The son of a United Nations worker, he’s grown up in Europe, the Middle East, Asia, Africa—everywhere but home. He’s finally settled at a great school in New York and is making friends when, suddenly, his world is turned upside down.

Ryan is blindsided when his father disappears and his mother is abducted. Left with nothing but questions, he soon discovers his parents have been leading a double life. They actually work with the Emergency Rescue Committee, an underground organization that has performed dangerous rescue missions since World War II, and they’ve been secretly training Ryan to follow in their footsteps.

With his parents’ lives in the balance and more at stake than he knows, Ryan dives into a mission of international intrigue that sends him around the globe.

Ron McGee recently sat down with The Big Thrill to discuss RYAN QUINN AND THE REBEL’S ESCAPE:

The Ryan Quinn books are, first and foremost, a fun, action-adventure series that I hope will make kids eager to keep turning pages.  But they also have an international scope and are grounded in the historical reality of the Emergency Rescue Committee.  Ideally, this will give parents, teachers and librarians a launching point to encourage kids to explore ideas of personal sacrifice and global responsibility in the real world.

So many of the middle grade books I love include heroes with magical powers battling otherworldly enemies. But my favorite adult thrillers feature real-life tough-guys like Jack Reacher, Lucas Davenport, and Gabriel Allon.  I wanted to create that kind of hero with Ryan Quinn.  Smart and resourceful, but grounded in reality.  The kind of hero where a kid could read it and say, “Hey – that could be me!”

The biggest surprise was how Ryan’s friends Danny and Kasey came alive as I was writing.  The more I wrote about them, the more real and fun they became.  They ended up playing a much bigger role in the story (and in the series as it moves forward) than I originally imagined.  I started out writing a solo adventure, but by the time the novel was finished, everybody in Ryan’s life had a vital role to play in the final showdown.

Like so many of the thrillers I love, this book is full of twists and turns.  Ryan’s adventure begins with the exposure of a long-held secret, but it also ends with even more secrets coming to light.  Secrets that will rock Ryan’s world as the series moves forward. And don’t tell anyone, but someone in Ryan’s life is not exactly who they first appear to be…

I’m a big thriller fan and religiously read a wide variety, from procedurals to modern crime to spy stories.  But in my teens, the novels of Elmore Leonard and Robert Parker were my first inspiration, both in the quirky characters they introduced me to and in their succinct, descriptive prose and dialogue.  Whenever I need a breath of fresh air, I still find myself going back to read many of them time and time again.

“Ryan Quinn and the Rebel’s Escape takes off running and never stops. I found myself reaching for the nonexistent seatbelt in my reading chair. Author Ron McGee should be nicknamed Mr. Adrenaline: he jolts, he surprises, and he writes a suspenseful, just-won’t-quit adventure thriller that’s certain to have you reading under the covers at night long after the lights are supposed to be out.” 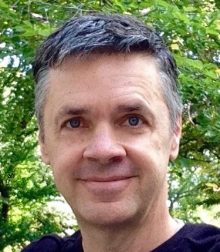 Ron McGee makes his middle-grade novel debut with RYAN QUINN AND THE REBEL’S ESCAPE, the first exciting adventure in a new series following the exploits of a teenager who gives James Bond and Jason Bourne a run for their money.

A prolific writer of film and television, Ron is a past winner of the Writers Guild of America award for his work on Disney Channel’s Halloween hit Girl vs. Monster. As a writer and producer of TV series, he has written for the crime drama Rizzoli & Isles and the action-adventure The Nine Lives of Chloe King. Ron has penned numerous movies for television covering everything from the story of 60s boy-band The Monkees to epic disasters to behind-the-scenes dramas of sitcom favorites Saved by the Bell and Full House.