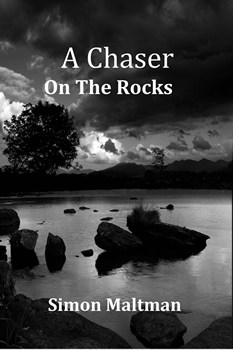 Simon Maltman began his artistic career as a singer/songwriter, and his experience as a lyricist shows in his spare, cut-to-the-bone writing style, and the rhythms of his characters’ dialogue. His debut novel, A CHASER ON THE ROCKS, is set in Northern Ireland and is best described as a mystery noir with a twist ending worthy of Dennis Lehane’s Shutter Island. The similarities are primarily in tone rather than content, though, so no spoilers here.

When asked about his writing journey, Maltman says, “I first started writing crime fiction shorts about four years ago. Before that I dabbled in different types of writing, though mostly in music. I started getting some stories published and gained a few nice reviews from bloggers and magazines. I’ve just been building it up really, trying to find a bit of an audience.”

The novel is structured as a story within a story, as modern-day private eye Brian writes a 1940s narrative about a character named Chapman. This narrative, undertaken at the suggestion of Brian’s therapist, contains echoes of and clues to Brian’s current circumstances.

Please join me in welcoming Maltman for a chat about A CHASER ON THE ROCKS.

Thank you for taking the time to talk to us about your new book. Why don’t we start with how you decided on the parallel structure for this novel?

I had been approached by an agent to write a novel, and I had been trying out a few ideas. I particularly favored two protagonists that I had used in a number of shorts. The idea just hit me along the way that Brian could be writing the Billy story. It then just grew from there, that Brian writes stories as part of his mental health recovery. Then came the linking them together and trying to structure it so it’s not confusing for the reader.

What were some of the challenges of this structure?

The main thing was that I wanted both stories to be enjoyed independently, but also to try and make the concept itself interesting and worthwhile. It was necessary to put a lot of time into the weaving together, and I approached much of the drafting in a piecemeal kind of way. One of the most enjoyable aspects was to create Billy through the lens of Brian.

The book has been characterized as modern noir. Do you think that’s accurate?

I would say it is. You could possibly call it a mystery or psychological noir. The Billy part in particular has a lot of classic noirish elements. It’s got the hard drinking and smoking PI, mysterious cases, murder, some espionage, and the like. In the Brian part it’s hopefully more modern in tone, dealing with contemporary issues, but still pretty noirish. I’m a big fan of various crime fiction, and I also love classic film noir.

How does the setting affect the story, and how did you handle it differently in the two different parts of the book?

I set everything in real places in Northern Ireland that I know well. I’ve tried to make the novel quite visual in describing some of the atmospheric and dramatic scenery like in The Giant’s Causeway and also the hard streets of Belfast city. I carried out a lot of research for the 1940’s part and had to be careful not to have places that hadn’t been built yet. I enjoyed putting the same settings in both stories, with Brian and Billy each passing through them at some point. The scenery in my home country has been a big influence and I’ve tried to show the beauty as a backdrop to some fairly dark stories. One thing I wanted to avoid was to write specifically about The Troubles.

The book ends with an unexpected twist. Did you know how it would end when you began? Can you tell us, without giving away the ending, how you went about planting (and obscuring) the clues to it?

I didn’t! I didn’t actually know it until I was nearly done with my first draft. It’s one of the best feelings in writing I think, the way the story can unfold and you don’t know where it’s headed yourself. My first draft was quite short and I approached the following drafts by concentrating on specific areas and building them up, trying to include more detail and develop the sub plots. I found it a really positive way to work.

How does your background as a musician and songwriter influence your novels?

It definitely creeps in, in the stories with references to various musicians and styles. I find writing is quite different from something like recording. In a studio I’m very much one for keeping the first take that has the energy, maybe. In writing, I’ve found it much more about drafting and refining.

Mostly I start to write about ten or eleven at night, after the kids are well tucked up in bed and my wife usually too! I’m lucky to have a large out building that I can put some music on in and get onto the laptop. I like loads of different types of music, but for writing sometimes vocal music can be a bit distracting. At the moment I usually listen to hard bop jazz.

The main thing I would say is to persevere and to cast a wide net. No amount of success in the promotional side will come without a lot of hard work, never mind working on the writing.

What’s next? Will we see more of Brian and Chapman?

Yes! I’ve just signed a contract with my publisher for a collection of my short stories, including all of those two characters’ series shorts up until now. Hopefully it will be out early next year. 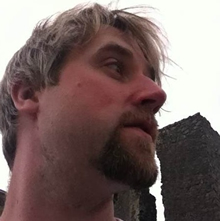 Simon Maltman is a writer and musician from Northern Ireland. This is his debut novel after previously having crime fiction short stories featured in a number of magazines and anthologies. He has also had poetry and articles published in a range of magazines. Simon has self-published a number of crime fiction e-books over the last year. There is work underway for further crime fiction releases in the near future.