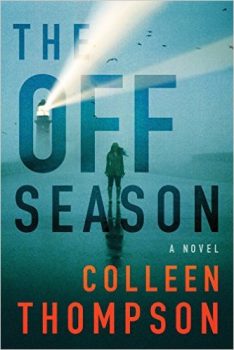 Colleen Thompson is the author of 28 books—from fast-paced romantic thrillers to action-packed historical romances. Her books have garnered many awards and made several different best-eller lists.

Thompson is back with THE OFF SEASON, a novel that follows heroine Christina Paxton who has left her familiar Texas environs to spend the winter season on the New Jersey shore. On a dark, stormy night, her two-year-old daughter begins speaking of things in the past that she couldn’t possibly know—and calling Christina by a name she hasn’t heard in 30 years.

This month, Thompson shares more about this chilling romantic suspense in The Big Thrill.

You set THE OFF SEASON on the New Jersey shore in winter, rather than your usual Texas setting. Why?

After moving to Texas years ago, I fell in love with my oversized adopted state, with its varied landscapes, its rich history, and its fascinating people. But more recently, my thoughts have turned to the things I loved growing up in small-town southern New Jersey, especially the tiny shore communities, which take on an eerie, almost haunted beauty when all the visitors leave during the winter months. I wanted to capture how it feels, walking on a deserted beach with the cold wind blowing off the Atlantic, or catching a glimpse of a fog-shrouded deserted lighthouse in the distance.

Your heroine, Dr. Christina Paxton, is emotionally vulnerable at the start of THE OFF SEASON. Is her mindset different than in your previous books?

As with the characters in all of my other stand-alone romantic thrillers, Christina begins the book at a point of transition, shortly after returning with a two-year-old to her tiny hometown following the sudden death of her much older husband. Housesitting one of the huge beachfront Victorians her real estate agent mother manages during the off season to keep it looking lived in, Christina is struggling to adapt to the feeling of being an outsider in her own hometown. I find the notion of returning home after years away really interesting—the idea of dealing with the fact that your time away has changed you in such a way that it forever shifts your old relationships.

Many of us in America’s hinterlands picture New Jersey as urban and industrial. Tell us about the Jersey Shore, and especially, what it’s like in the winter.

Southern New Jersey is a great deal more rural than the better-known areas closer to New York. There are a surprising number of farms (nothing beats fresh Jersey sweet corn or home-grown tomatoes), forests (notably, the Pine Barrens, home of the legendary Jersey Devil), and tiny towns (in various states of decay or historic preservation) dating back to Colonial days. To reach the shore communities, you have to pass over salt marshes, which nourish the young of so many species, taking the same route visitors have traveled for many generations.

THE OFF SEASON gets rolling when Christina’s slumbering two-year-old sits up in her sleep and begins talking about things she couldn’t possibly know. Where did this idea come from?

Several years ago, I read an article about parents whose toddler-preschool age children suddenly began making claims suggesting they had died or been killed before coming to live with their birth families. Many of these little ones have seemed to know far too much detail about the lives and deaths of strangers who have turned out to be real people. Like my story’s main character, Christina, I’ve never been a “woo-woo” person, preferring logic and science to offer explanations, but I couldn’t stop thinking about how terrifying it would be to have a child, in the darkest hours of the night, speak of things she couldn’t possibly know.

You have said that THE OFF SEASON blends many genres—romance, mystery, psychological suspense, and Gothic—because you set out to write a kind of book you wanted to see on the shelves but have never found. Can you explain?

For too many years, books were strictly forced into boxes to make marketing easier for publishers and booksellers. But readers aren’t so simple. We tend to love books that can’t so easily be categorized (Diana Gabaldon’s Outlander, George RR Martin’s Game of Thrones, and many others). So I began to realize, if I wanted to read a psychological suspense with ghostly, gothic overtones, a heavy-duty mystery, and a hopeful romantic/personal journey, there were bound to be other readers hungry for the same sort of thing. Thankfully, my agent and the brilliant editors at Montlake agreed!

New Jersey to Texas isn’t exactly a well-trodden immigration route. Talk about the contrast between locations, and what has kept you in Texas these past years.

After graduating with a teaching degree in New Jersey, I entered the workforce at a time of belt-tightening, where teachers were being laid off left than right. So, along with so many of my generation, I went from Rust Belt to Sun Belt (Arizona, to begin with) for employment. A few years later, I took a chance on fast-growing Houston, where I met a handsome firefighter who delighted in showing me the wonders of his home state. We’ve been together ever since: the firefighter, Texas, and me.

You work with rescue dogs—what’s your best real-life dog story, so far? What about the dog in THE OFF SEASON?

I adore the challenge of taking an unwanted “three-time loser” of a dog and watching him or her blossom into a wonderful companion. Over the years, I’ve helped to network many, and we’ve brought quite a few into our home. One who stands out in my memory is Echo, the first of our off-track greyhounds. Within days of her adoption, she was diagnosed with kidney failure. After that was conquered (at great expense), we found out she had cancer, too. The rescue organization offered to exchange her for a healthier animal, but by then, we were completely smitten…and she thrived after surgery and lived with us another nine years, until her passing. I still miss that dog so much that she inspired Christina’s retired racing greyhound, Max. As with all the pets I include in my books, Max behaves like a real dog, with their accompanying quirks and foibles. I’m not much into romanticized versions of the perfect animal because we love them, warts and all, just as they love us.

When you lecture aspiring authors, what is the most important advice you share?

I like to tell aspiring writers that publishing will disappoint you, but the writing never will. It’s my reminder to them (and myself!) that working in the industry, you’re at the mercy of many things that are out of your hands, from the book’s placement to its cover art, title, and “in-house enthusiasm,” so focus on the only thing you can control: your own process, your journey to make your work better, sharper, and more appealing, and the joy you find in your characters and story. Because that part alone is all yours, whether your story reaches an audience of one or one million. And that part is what will see you through all the other ups and downs.

What’s next for Colleen Thompson? Will you stay in the romantic suspense genre? On the Jersey Shore?

Though most of my books could easily be classified as traditional mystery/suspense or psychological suspense, I love including a thread of romance to showcase the main characters’ emotional journey. I genuinely want them to be happy after all the Hell my plots have put them through. And I think most readers prefer ending their stories on a hopeful note as well with most of the difficulties resolved. Real life is stressful enough without reading books that sink you into a funk with gloomy or horrifying endings.

For my next project (which I’m keeping mum on for the moment) I’m venturing back to a Texas locale but am considering a return to the Jersey shore after that. There’s definitely a flavor there that I’d like to explore further. 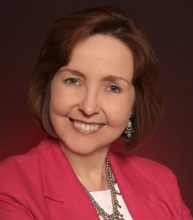 RITA-nominated, bestselling author Colleen Thompson writes stories that explore how love can kill, and how it can also empower us to seek healing and justice. From her fast-paced contemporary romantic thrillers to her sweeping historical romances (written under the pseudonym Gwyneth Atlee) she puts the reader in the heart of the story… when she’s not busy exploring remote corners of her adopted home state of Texas, working with her rescue dogs, or speaking and teaching on the craft of writing.