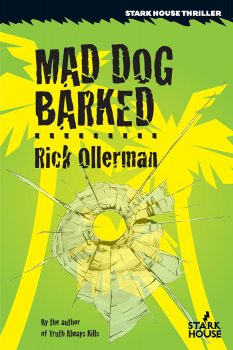 Rick Oller is on a roll with great reviews and great noir thrillers. The title of his new book—Mad Dog Barked— is enough to make someone pick it up out of curiosity, and then stay to appreciate the surprises and the story.

Oller chats with The Big Thrill this month to talk about the inspiration behind his new release, the meaning of “noir”, and his advice for aspiring writers.

Please tell us what MAD DOG BARKED is about.

I never want to write the same book twice (or more). MAD DOG is my private investigator book, about an arrogant man who gets results by doing things his own way. He prefers to work on cases where he’s going against an aggressive prosecution but here he finds his way onto something when he takes a large retainer from a rich man who then disappears, leaving behind a cryptic and mysterious letter.

Your excellent website pegs you as a dynamic noir author.  Do you see yourself that way and what does noir mean for your writing?

Noir to me means your protagonist starts out screwed and ends up more screwed. I don’t think I’ve written a noir book yet that fits my definition. The protagonists may not be in a good place at the end of the book but they’re often more messed up than they were in the beginning. But people, innocent and good people, have often been hurt by his actions. So there are elements but I agree with Bill Crider’s review of MAD DOG BARKED when he said it “wasn’t quite noir” to him. Not quite to me, either, but there are certainly elements.

I love the Ed Gorman review for your work: “This has the power to hurt you.”  What did he mean by that and how has that worked in your writing?

When I saw that I thought, “Ed so gets me.” I want to make the reader feel the characters’ pain in the books. In addition to increasing tension and suspense, involving the reader with an emotional response helps set the hook deeper and deeper. Ed wrote that about my previous book and if that book will “hurt” the reader, I want the reader to finish MAD DOG and feel like they want to come after me with a 2 x 4.

Can you expand on your title MAD DOG BARKED?  It’s a real grabber.  How does it tie in to your story and characters?

It’s from a poem by Jack Kerouac, and it struck me as soon as I read it. Since there’s no actual dog in my book, it’s obviously metaphorical. To me, it represents a version of the main character who is a fundamentally moral person that acts as though he can almost do what he wants as long as he doesn’t get caught. He takes chances, on both sides of the law. He’s the “mad dog” that’s “barking.”

Also, did you have any input for the cover?

I did. I suggested the green motif as it goes well with my earlier covers, as well as the bullet hole graphic on the cover. My first choice was for a document riddled with bullet holes and dripping blood, but that never seemed to work out as well as it did in my mind.

What makes your PI main character stand out for you and the reader?  Is it tough to write a fresh PI when so many memorable ones have been created over the years?

I know some people say PI stories are mined out, but when you think that if a person is arrested and has to face the government with all its resources—the D.A.’s investigators, police, crime labs, FBI assistance, law enforcement bias—it occurred to me there was room for writing about an advocate for the defense. The main character, Scott Porter, has people that do the less exciting background searches and cheating spouse cases, but he likes to work for the people that are up against the machine. I hope that his character is fresh not only because of some of the ethically ambiguous challenges he sets for himself, but also because he is as emotional and as human as the rest of us. And this perhaps is his most fatal flaw.

Can you give readers and other writers advice on your writing techniques?  Are you a pre-planner or do you create as you go?

Not a pre-planner in the least. I come up with an opening set up usually by asking “what if” sorts of questions. For TRUTH I asked myself several: if the FBI tells us that stalking is the only reliable predictor we have of murder, what would you do if you knew this and saw your significant other as a victim? A restraining order often makes things worse, so what else can you do if you feel it’s a choice—which is the key word here—between the stalker and your wife? Why are lawyers the only ones in the court room not sworn to tell the truth? Why throw out the results of an illegal search that proves someone guilty, why not prosecute the police who did wrong instead? Why is prostitution illegal and pornography not? Coming up with answers to these things gave me my characters and basic plot. From there, it’s a matter of writing style and being interesting.

You also write short stories.  Do you prefer one format or the other?  What are the pros and cons of writing shorter or full length stories other than the time difference involved?

For a short story, I have to know the point of it before I start. You can’t hold an entire novel in your head at once, so it’s freer to me. Instead of trying to get across primarily one thing in a short story, a novel allows me to do much more with characters and relationships. If I had to pick one, I’d choose writing novels….

Can you give other writers any advice on the discipline it takes to write?  Is it difficult to keep ‘real life’ from intruding and how do you find that balance?

So many writers seem to obsess over television or movies. I’m a contrarian here: with the exception of occasionally coming across some wonderful dialogue, these things sap your writing time and don’t give enough back. Find the time that’s natural for you to write (for me it’s mornings) and do it at least five days a week. Never force it. Write until you feel the spark is gone for the day and then stop or you’ll be deleting it tomorrow. Always entertain. 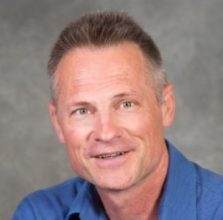 Rick Ollerman was born in Minneapolis but later moved to more humid pastures in Florida. He made his first dollar from writing when a crossword magazine printed a question he’d sent. Later he went on to hold world records for various large skydives, appear in a photo spreads in LIFE magazine and The National Enquirer, can be seen on an inspirational poster during the opening credits of a popular TV show, and has been interviewed on CNN. He was also an extra in the film Purple Rain where he had a full screen shot a little more than nine minutes in. His writing has appeared in technical and sporting magazines and he has edited, proofread, and written introductions for numerous books. He’s never found a crossword magazine that pays more than that first dollar and he now lives in northern New Hampshire with his wife, two children and two Golden Retrievers.