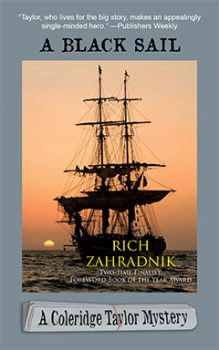 “Taylor is investigating the murder of a Westchester housewife whose body is pulled from New York Harbor with bricks of heroin strapped around its waist,” Zahradnik says. “Taylor thinks he’s on to a war between the Italian mob and a Chinatown tong over heroin distribution in the city.  This is going on as the massive Bicentennial celebrations are taking place in the harbor and around the city, celebrations that keep pulling Taylor from the crime story he really wants to peruse.”

The Big Thrill chatted with the author this month to get his story, along with his thoughts on writing award-winning thrillers.

Coleridge Taylor has been described by reviewers as “a reporter with a heart”—what sort of man is he?

Taylor wants to get the stories no one else is going after—about the victims no one cares to cover. He thinks if he writes their stories, the victims will have some kind of a voice. He is pretty single-minded in his focus, but at the same time can to talk with anyone. Because that’s what great interviewing is—a great conversation. He’s been chastened since Last Words. In that book, he had to get his job back by proving he didn’t invent a story about a nine-year-old heroin addict. In book 2, Drop Dead Punk, the paper he’s worked for his whole career folds. That shakes him up pretty good.

Taylor has the help of his now girlfriend Samantha Callahan. How does their relationship change the dynamic of this book compared to Drop Dead?

Samantha is an ex-cop whose own story was wrapped up in Drop Dead Punk. In that book, she doesn’t trust him for the longest time—most cops don’t trust reporters—and they don’t really work together until late in the book. Now they’re in a relationship and she helps him out (as she will continue to), since she’s better at the physical end of handling bad guys.

The series is set in New York in the 70’s. What was it about this setting that drew your series here?

I lived north of New York and was there as a teen in the 70’s. But really, I wanted to write a story that didn’t have any of the instant-DNA typing, video cameras everywhere and facial recognition in nine seconds of the modern mystery. Television in particular has trained the audience this is all real, even though much of it is sci fi. I wanted a shoe-leather investigation. Phone booths not cell phones. That being my guiding philosophy, I picked 1975 for the first book simply because that’s the year the Vietnam War ended. Since book 1, I’ve brought other events into play as I’ve moved forward in the decade: the near bankruptcy of New York City, the punk rock revolution, the Bicentennial.

When you’re writing a fast-paced crime thriller, how do you balance excitement and mystery? Is it important for you to keep your readers guessing, or do you concentrate on keeping them on the edge of their seats?

I want them to be in pursuit of the mystery along with Taylor without figuring it out before him. I want there to be shocks of action and excitement throughout with a real edge-of-seats finale. In this book I tried something new. Almost the entire third act is a chase, rather than having the big boom come in the last two chapters, as I did in books 1 and 2. That took some work, given that mystery resolution was going on during the long chase.

Both Last Words and Drop Dead received fantastic praise and recognition. Did you find this put pressure on you when writing A BLACK SAIL, or does the success of the earlier books spur you on?

Confidence as a writer is hard to come by when you’re toiling by yourself with no agent, editor or audience. The awards were one of those nice signals that said, “you got it right this time,” which then gave me confidence as I wrote. Confidence improves craft, if not overdone. I will admit that writing A BLACK SAIL had me a little worried because I did some things in Drop Dead Punk I could not do again.

Which authors have inspired you in the past and are there any you’re currently excited about?

I just read Patrick Lee’s The Runner, the first book in his Sam Dryden series (and his fourth overall). A great thriller.  Radha Vatsal’s first book, A Front Page Affair, is excellent, as is R.G. Belsky’s  Shooting for the Stars. They both feature journalists as protagonists—in different eras than the 70’s—so I guess you could say I’m a little journalism obsessed.

What’s next for Rich Zahradnik? Are you planning on another instalment in the series?

I’m just finishing a thriller set in the present day called The Causeway, in which three people witness a drug murder as a hurricane is about to strike a barrier island off of New Jersey. With the storm wreaking havoc, they race to get to the Causeway off the island before the bad guys can get them.

The next Taylor novel will be set during the months in 1977 when the serial killer Son of Sam was on a killing spree and a July blackout resulted in thousands of arrests and millions in damage. Exactly what crime Taylor will be chasing I’m working out. 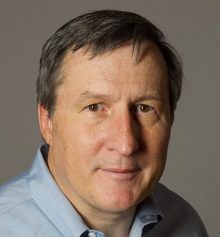 Zahradnik was a journalist for 30-plus years, working as a reporter and editor in all major news media, including online, newspaper, broadcast, magazine and wire services. He held editorial positions at CNN, Bloomberg News, Fox Business Network, AOL and The Hollywood Reporter.

In January 2012, he was one of 20 writers selected for the inaugural class of the Crime Fiction Academy, a first-of-its-kind program run by New York’s Center for Fiction.

Zahradnik was born in Poughkeepsie, New York, in 1960 and received his B.A. in journalism and political science from George Washington University. He lives with his wife Sheri and son Patrick in Pelham, New York, where writes fiction and teaches kids how to publish newspapers.