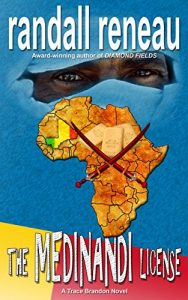 Geologist Trace Brandon has been in Mali less than two months. He’s nearly been killed twice, lost a drilling rig to a well-placed RPG, and fallen for Peace Corps volunteer Molly Wainwright. All pretty much SOP for West Africa, until his friend Gordon Watson is brutally kidnapped by Al Qaeda.

Running out of time to meet the ransom demands, Trace turns to a Malian arms dealer and a French-Canadian ex-mobster for help. Together, they come up with a risky, highly illegal scheme to rescue Gordon.

If the plan goes south, Trace knows he could end up in prison—or the Bamako expatriate cemetery on Rue de Dakar…

THE MEDINANDI LICENSE is available from Amazon.

Randall Reneau is the author of five previous novels, including Diamond Fields, a Royal Dragonfly Book Awards grand prize winner, and Deadly Lode, a Richard Boes Memorial Award winner . He is also a two-time winner of the Pinnacle Book Achievement Award. A former international geologist and Vietnam veteran, he lives with his wife, Lynne, in Austin, Texas.