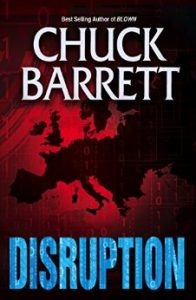 Former Naval Intelligence Officer turned secret operative Jake Pendleton finds himself in a pulse-pounding race to stop a cyber-terrorist from releasing a string of the most heinous cyber-crimes the world has ever seen. Crimes that could render the world’s advanced technology useless.

Jake teams with his partner, Francesca Catanzaro, to track down their only lead, a white-hat hacker in Italy known only as The Jew. A man who might hold the key to stop a group of black-hat hackers from causing worldwide chaos—tag named Disruption.

After a search of the hacker’s flat in Rome turns up empty, Jake and Francesca follow the clues—a trail of dead bodies that leads them across Europe. Along the way, Jake discovers a possible link between recent hacks and a Malaysian airliner that mysteriously disappeared.

In the final adrenaline-charged moments before Disruption, Jake and Francesca find themselves in a high-voltage race to stop these cyber terrorists from unleashing destruction against their sworn mortal enemy.

DISRUPTION is available from Amazon, Barnes & Noble and iTunes.

“Loved this book! It takes a basic premise: that everyone has been hacked and is divided by those that know it and those that don’t know it. From that premise, the author has created a complex thriller spanning continents and surrounding the ultimate hack. If you enjoy thrillers, you will love this book. The author has created descriptions of the various locals that make you feel as though you’re there. He has then blended in a great deal of relevant religious history and customs and mixed with political espionage and one country’s goal to exterminate an entire nation. This is a sobering glimpse into evil. Yes, it is fiction, but the actual motivations of the antagonists are very real. This is a must read for fans of the genre. The author is on my must read authors’ list and this novel demonstrates why he is on that list.” — Linda Quick, Book Reviewer

“Excellent book. If more people were aware of the precarious cyber security the world would be better off. Believable plot, strong characters. The interaction between the main characters is strong, and it would e great to think that there are still individuals involved in politics who cared more for the people who elect them than their own agenda. I will read more from this well spoken author.” — Margaret Homes, Book Reviewer

Chuck Barrett is the bestselling author of the Award-Winning Jake Pendleton series—Breach of Power, The Toymaker, and The Savannah Project, as well as his latest award-winning blockbuster, BLOWN, the first book in his new Gregg Kaplan series.

In addition to writing thrillers, Barrett speaks and conducts workshops at book festivals, book clubs, reading groups, writers conferences, and writers groups. Some of his topics include Nuts & Bolts of Self-Publishing based on his book—Publishing Unchained: An Off-Beat Guide To Independent Publishing—as well as, Blueprint for a Successful Book Launch, Getting from ‘Idea’ to ‘Finished Manuscript,’ Mysteries & Thrillers: Fact or Fiction, and Adding the “What if” in Storytelling.

Barrett is a Florida native, a graduate of Auburn University, and a retired air traffic controller. He also holds a Commercial Pilot Certificate, Flight Instructor Certificate, and a Dive Master rating. He enjoys fly fishing, hiking, and most things outdoors. He and his wife, Debi currently reside in Colorado.