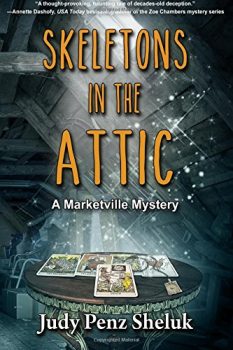 Judy Penz Sheluk has no illusions about the hard work required to make a name for herself in the competitive and ever-changing publishing industry. For the release of her new book—SKELETONS IN THE ATTIC—Sheluk embarked on an aggressive word-of-mouth campaign, including writing an impressive 18 guest blogs that were set up months in advance.

Her efforts paid off. Sheluk reports that her new novel, the first in her Marketville Mystery series, set pre-order records with her publisher. The mystery centers on Calamity (Callie) Barnstable who is surprised to learn that she’s the sole beneficiary of her late father’s estate, including a house in Marketville that contains more than memories. In order to claim her inheritance, Callie must move into the house and solve the mystery of her mother’s murder.

With a hook like that, who wouldn’t want to blog about it?

“I think it also helped that Imajin Books put SKELETONS IN THE ATTIC on Kindle as a .99 promo (regular price is $4.99),” she says. “I also made several Facebook and Twitter posts that I created. Some had the advance reviews on them (from amazing authors like Annette Dashofy, Catriona McPherson, Ellen Byron, Jeff Buick and Diane Vallere, plus one from Midwest Book Review), and some had a brief excerpt from the book which I ran each Tuesday as a ‘Tuesday Teaser.’ There’s an old adage: the harder I work, the luckier I get. It’s a motto I live by, and in this case all the stars (or is that skeletons?) seemed to align.”

Speaking of lucky, The Big Thrill had the pleasure of interviewing Sheluk this month, where she speaks candidly about writing, marketing, and what inspired this exciting new series.

Attics are such great places for a good—and eerie—mystery. Was there an attic in your childhood (or adulthood) that inspired some of the great atmosphere you’ve included in the book?

I’ve never lived in a house that had an attic that was more than pink insulation and crawl space, but I could imagine an attic like the one I created. Hot, claustrophobic, creepy, and filled with trunks containing secrets from the past. Do you remember the Nancy Drew book, The Mystery of the Brass Bound Trunk? One of the trunks my protagonist, Callie, finds in the attic, is patterned after that trunk. So I suppose, in a way, it is culled from a childhood memory.

The action is SKELETONS IN THE ATTIC kicks off quickly! What authors have inspired your writing style? Is there one particular writer who has helped you understand the importance of pacing?

I’m a voracious reader, and there are many authors I love and admire. When it comes to pacing, though, the absolute master is John Sandford. I pick up one of his Prey novels and literally cannot put it down until I’m too bleary-eyed to keep reading.

Mysteries are often complex and often require some extra plotting to make sure the “clues” are well placed. You do such an excellent job. What is your writing process? How tightly do you plot your books?

I’m a complete pantser. I start with a very basic premise, in this case “What would happen if a woman inherited a house she knew nothing about, from her father, with the proviso that she investigate the murder of her mother thirty years earlier—a mother she had, until now, believed had left voluntarily?” Once I have the premise, I try to write a chapter a day, and I try to end every chapter with some sort of hook or question. Later in the day, I’ll brainstorm possible ways to go with the next chapter. And on it goes. Once the story is done, I’ll go back and layer in the clues, and where necessary, additional information. While I’m writing, I’ll highlight a sentence and put in [Must add clue for this earlier] or [Must research this in more detail]. That makes it easier for me on round two. Beyond that, my first drafts are pretty clean. I tend to edit as I go.

SKELETONS IN THE ATTIC is the first in a series—which is exciting, and good news for fans of this book. What can we expect next?

I wish I knew! I do know book two is due to Imajin Books on March 31st so I have a deadline, but I’m still toying with the premise. I’m still not sure whether Callie will be the protagonist, or whether one of the other characters in SKELETONS IN THE ATTIC will take the lead. Tana French is the master of that technique, and I’m a huge fan of her work. I know there are some loose ends in SKELETONS IN THE ATTIC, and I’ve had people say they need those tidied up. But life has loose ends, doesn’t it? Everything isn’t tied up in a bow.

What inspired Callie’s character? In what ways do you see her evolving in subsequent books—without giving away too many spoilers, of course.

I came up with her name, first. Calamity (Callie) Barnstable. I wanted her to have “loser radar,” meaning her relationships with men had left her somewhat gun-shy. There’s a part in the book where Callie recalls thinking she was going to get an engagement ring on Valentine’s Day and instead ends up getting dumped. That happened to me, on a lesser level. I was sixteen and I was sure the guy I was “going around with” was going to give me a ring. He did. A ring on the phone to say he was seeing someone else. Didn’t even tell me in person.

I also wanted Callie to be strong, and self-sufficient, a woman who could keep her emotions in check (much is made of how she will not cry over her father’s untimely death), but I also wanted her to be a little bit jaded, and understandingly distrustful. I think she’s all of those things. As for where she goes … I’m not sure. Will she finally find love? Or will she leave Marketville and go back to Toronto?

Readers will have to wait for Book 2 to find out!

Skeletons in the Attic, Judy’s second novel, and the first in her Marketville Mystery series, will be published in August 2016 by Imajin Books.

In her less mysterious pursuits, Judy works as a freelance writer; her articles have appeared regularly in dozens of U.S. and Canadian consumer and trade publications.

To learn more about Judy, please visit her website.