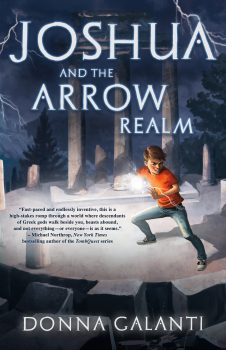 It’s been a little more than a year since Donna Galanti introduced readers to Joshua Cooper, the young hero of her MG fantasy novel Joshua and the Lightning Road. The book was conceived as a standalone, but Galanti’s blend of fast-paced adventure and unbridled imagination struck a chord with publisher Month9Books, and the author found herself with an unexpected series on her hands.

Book one centered on 12-year-old Joshua’s first ordeal with the Lightning Road, an interdimensional pathway that delivers him to a realm where children are kidnapped and enslaved by a sinister entity known as the Child Collector. In the newly released follow-up JOSHUA AND THE ARROW REALM, the boy finds himself back in Nostos and caught between warring factions of the Olympian heirs–a group that includes Galanti’s distinctive spin on figures borrowed from Greek mythology.

In her latest interview with The Big Thrill, Galanti, who also pens adult-oriented paranormal thrillers, discusses the unique rewards and challenges of crafting adventure tales for young readers.

For readers who are just discovering the series, what was the genesis of the Joshua Cooper books?

My biggest inspiration for writing book one in the series, Joshua and the Lightning Road, was my son Joshua Cooper. Years ago, when my son was four, we’d like to sit on the front stoop together at twilight under a tree and watch the stars come out. It became story time too. That’s where I would spin wild and silly tales for my son. It appealed to my desire to create new worlds where we could live out magical and heroic adventures–all led by a hero who came into his own, Joshua. Those summer nights under the stars faded but the idea didn’t. That story eventually became Joshua and the Lightning Road. As my son has grown older (now 13) he continues to inspire me with plot and character ideas when I get stuck in writing the series!

I’d love to know your thoughts on sculpting character arcs in a kids’ series. How do you keep the characters growing in a way that kids can relate to, without losing the elements that make them appealing to young readers in the first place?

When it comes to writing any series, I think a writer has to consider the character’s journey not just for book one but across the entire series–before it’s even written. I ask myself, how could they transform in each book and across multiple books? Kids can be drawn to reading about characters a bit older than them that aren’t too perfect but heroic in their own way and also dive into solving their own problems. I try to keep this in mind when writing for kids, and also to build on what the character has already learned and how they have changed from each event. For example, in the Lightning Road series, Joshua learns that he should trust his instincts and not all is as it seems–so he carries this new philosophy with him onward as he goes, and that affects the outcome of his next adventure.

Stories that are grounded in mythology and folklore have proven to be far more than a trend in YA and MG fiction. Why do you think these elements resonate so much with younger readers?

Many of them are ageless and deal with universal truths that tweens and teens are experiencing themselves in both painful and wonderful ways: conflict, love, loss and friendship. Kids can relate to these topics along myriad avenues growing up. Also, there are quite a few superheroes in mythology and folklore, and kids love superheroes (and adults too!).

In addition, as publishers seek out more diverse books, authors can turn to folklore and mythology to write with diversity in mind. Many different people from around the globe have traditional tales passed down that enrich their culture: Indian, Native American, Egyptian, African, South American, Asian, Caribbean, Scandinavian, etc. What’s wonderful about this increased trend in multi-cultured books is that now children have more stories they can connect with based on their own background.

Myth and folklore seem to inform your fiction in other ways as well. Have mythic story structure and archetypes helped you shape Joshua’s journey?

Absolutely! I looked to mythic archetypes in creating the Lightning Road series, such as the Hero, the Sage, the Warrior, and the Destroyer. Story structure also comes into play by incorporating the Quest in Joshua’s adventure. Quest stories with the Hero are among my favorites, especially in mythic tales such as the King Arthur stories and Beowulf but also in modern times, like with Luke Skywalker in Star Wars. I love reading and writing about the archetypal hero on a quest, to follow him through a transformative journey that tests him and to see him re-emerge changed on the other side. This is what I put Joshua through in the Lightning Road series, and I push him even further in JOSHUA AND THE ARROW REALM. His road is not an easy one!

Has writing MG fiction taught you anything about storytelling that you plan to apply to your adult-oriented titles?

What can we expect from Joshua’s future adventures?

In book three, Joshua and the Fire Realm (date TBD), when Joshua is recruited by his mortal Child Collector enemies to join their revolution in the Fire Realm, he discovers a person’s strength is defined not by the scope of his power, but how he chooses to use it. His wisdom is put to the ultimate test, however, when he must weigh his personal quest to claim his lost family with his obligation to save a whole world.

Do you have any current or upcoming projects that you can tell us about?

I am currently writing an epic teen fantasy with series potential that I’m very excited about! It’s set in an entirely new world that survives on inherited memory involving three rulers, two sons, one daughter – and a secret that could break, or bond, a kingdom. I’m also working on the final book in The Element Trilogy, my paranormal suspense series. 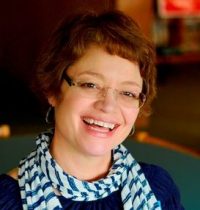 Donna Galanti writes thrillers for kids and grown ups. She is the author of the paranormal suspense novels A Human Element and A Hidden Element of The Element Trilogy (Imajin Books) and the Joshua and The Lightning Road series (Month9Books). Donna is a contributing editor for International Thriller Writers the Big Thrill magazine and blogs with other middle grade authors at Project Middle Grade Mayhem. She’s lived from England as a child, to Hawaii as a U.S. Navy photographer, and has had a career in marketing communications.