Industry Focus: On the Frontlines 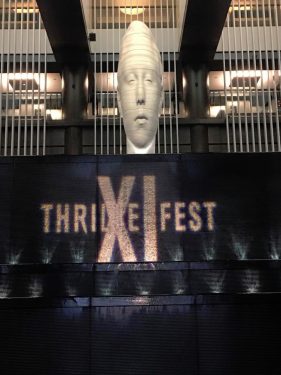 ThrillerFest attendees are still buzzing from this year’s memorable conference.  We kicked off the week with a day at the FBI where participants were fortunate to meet canine agent, Iris, a specialist in discovering electronics and computers, along with several human agents whose expertise ranged from counterterrorism to gangs to cyber crime.

We held a record eight classes for Master CraftFest where authors studied with New York Times bestselling authors Steve Berry, Grant Blackwood, David Corbett, Meg Gardiner, Heather Graham, Andrew Gross, and Gayle Lynds, in addition to screenwriting instructor Richard Krevolin.  And we have exciting news to share from CraftFest Director D.P. Lyle M.D. about next year: “Master CraftFest will again offer eight classes, each with a maximum of 10 students. This unique, all-day, hands-on school will be held on Tuesday July 11th, 2017. It’s always a long but very rewarding day. We have many excellent mentors lined up already, including Steve Berry, Lee Child, Gayle Lynds, Grant Blackwood, Meg Gardiner, and Andrew Gross. Plan to spend the day with one of these best-selling authors and gifted teachers.”

ITW works hard to provide exceptional schools for teaching the craft of thriller writing.  We want to support authors at every level, helping them reach their personal dreams and career goals.  As Lyle comments, “For over a decade now we have worked to fulfill this vision.  2016 was yet again a great success and now we are preparing our 2017 line up of teachers and classes.  As always, CraftFest will have four tracks that for 2017 will run all day Wednesday, July 12th, and for two hours on the morning of Thursday, July 13th. Many of your favorite teachers will return and other exceptional authors and teachers will be added as we continue to evolve and improve.”

We have also completed our second year of CareerFest, which focuses on the business side of writing.  Jeff Ayers, Kathleen Antrim, and Jon Land work tirelessly to put together the best of the best in publishing to keep our attendees up-to-date on all the latest innovations for publicity, marketing, and career success.  As Jon Land comments, “Along with all of ThrillerFest for 2016, CareerFest reached new heights.  Panels highlighting the world of traditional publishing, landing an agent, and finding success in Hollywood attracted large, engaged audiences attracted by the specificity of topics aimed at helping writers establish and build their careers.  Tilted as much to the independent leaning author as the author seeking a more mainstream road to success, CareerFest seeks to help all authors find the best and most viable routes to success.” 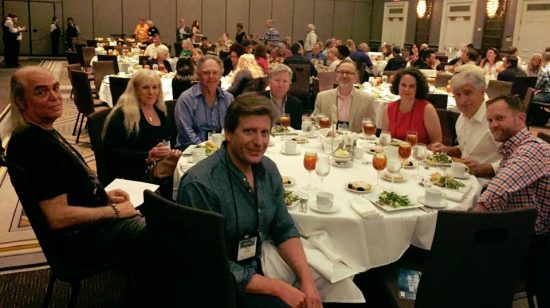 ThrillerFest had a blockbuster line-up of special guests, from 2016 ThrillerMaster Heather Graham to 2016 Silver Bullet Award recipient John Lescroart to our spotlighted authors C.J. Box, Gillian Flynn, and Walter Mosley.  ITW Co-founder Gayle Lyndssaus, “Interviewing C.J. Box was a thrill.  Who doesn’t love great stories set amid some of the most stunning country in the United States?  C.J.—or ‘Chuck’ as he’s known to his friends—is a first-rate author renowned for doing exactly that for 21 memorable adventures.  He’s a great guy, too.  Lucky me—I got to interview him!”

Our other co-founder, David Morrell interviewed Walter Mosley, and they could be ready for the stand-up stage if the laughter during their interview was any indication.  David comments, “For me, the highlight of ThrillerFest was the opportunity to interview Walter Mosley on stage. Not only are his novels brilliant—so is his conversation. Talking with him about his views on writing and life—sharing the experience with so many people—enjoying his rare sense of humor—I’m still smiling at the memory.”

And people are still talking about the wonderful repartee between Karin Slaughter and Gone Girl phenomenon Gillian Flynn.  Smart, witty, fun, they entertained the crowd with heartfelt stories and fascinating anecdotes.

Lee Child asked ThrillerMaster Heather Graham during their interview what career she would have pursued if she hadn’t been a writer, and many people discovered Graham’s passion for acting.  And it turns out singing is also in her vast repertoire of talents.  Heather performed onstage at the banquet with our resident rock stars Daniel Palmer and Brad Parks. 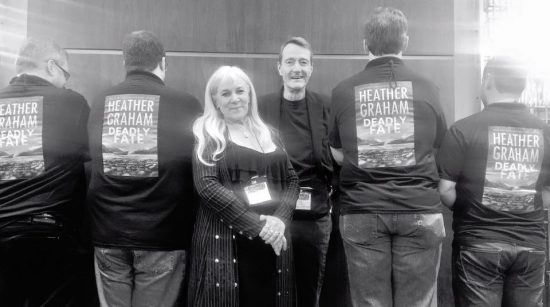 Heather Graham hangs out with her entourage—including Lee Child!

The debut author breakfast hosted by Steve Berry was another highlight of the conference, as we love learning about the new voices in crime fiction. We closed our festivities with the Saturday banquet, announcing the Thriller Awards.  Congratulations to Ian Caldwell, Brian Panowich, John Gilstrap, Joyce Carol Oates, Michelle Painchaud and Chris Kuzneski for their fabulous wins.

Every year, we honor a special individual who gives back in a memorable and generous way with our Silver Bullet Award.  This year’s recipient, John Lescroart, made a heartfelt speech at the banquet that left few dry eyes.

John shares, “The announcement that I’d been chosen as the 2016 recipient of the ITW’s Silver Bullet Award was an amazing surprise.  I had heard, of course, that I’d actually be receiving the award at ThrillerFest, but nothing could have adequately prepared me either for Steve Berry’s most eloquent and generous introduction during the banquet, or for the incredibly enthusiastic reception I received from my peers as I came to the podium to accept the award.  I’d say that this was a dream come true, except that in my wildest dreams it had never occurred to me that anything like this would happen.  In any event, receiving this award was undoubtedly the high point of my professional life, and a moment I will treasure forever.”

A beautiful message that inspires all of us to help others.

Huge thanks to our co-presidents Lee Child and M.J. Rose, the ITW board, as well as ITW Executive Director Liz Berry, for their leadership and commitment to making this organization such a supportive, friendly group.

And if you’re craving more contact with your fellow thriller enthusiasts, good news is coming your way.  Registration for Thrillerfest 2017 will open soon, so keep an eye on your inbox for the launch.  Our 2017 ThrillerMaster will be Lee Child, our 2017 Silver Bullet Award recipient Lisa Gardner, and spotlight guests will include the authors who contributed to ITW’s new anthology, MATCH UP.

Come to New York next July and join us for ThrillerFest XII, and, of course, CraftFest and Master CraftFest. We hope to see you there for what is always a fun and rewarding week.  And of course we will again have our popular Best First Sentence Contest.  So please work on your opening line.  See you soon!