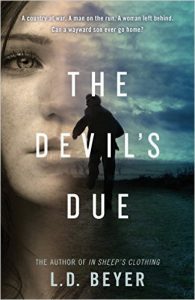 Forced to abandon his name, his country and the woman he loves, Frank Kelleher vows to one day return. But what awaits him when he does?

Guilty of a crime he didn’t commit, IRA soldier Frank Kelleher flees through the streets of war-torn Ireland with both the British and the Irish Republican Army trying to put a bullet in his head. He makes his way to America under an assumed name and with a forged passport, as the war in Ireland rages on. Settling in a new land, he finds he can’t let go of his past. Haunted by the fiancée he was forced to leave behind, by the deaths of three friends at his own hand, and by the country he was forced to abandon, Frank struggles to make his way in 1920s New York.

As much as he can’t let go of Ireland, he finds that Ireland can’t let go of him—and his past has a way of finding him, thousands of miles and an ocean away. He dreams of going home, but knows that it could get him killed. Then an anonymous letter brings news about his fiancée Kathleen and he realizes that he no longer has a choice. A cease-fire is declared and Frank sails home with dreams of finding Kathleen, putting his past behind him, and starting a new life.

When he arrives, he learns that the Ireland he was hoping to find—a united people finally free—was only a dream. With British soldiers withdrawing, long-standing feuds resurface, and Ireland is pushed to the brink of civil war. As tensions mount, he also learns that his sins will not be easily forgiven, and that he and Kathleen will never be safe until he clears his name.

If the looming war doesn’t kill him, trying to right the wrongs of his past just might.

THE DEVIL’S DUE is available from Amazon.

Beyer uses just the right touch of Irish names and a sense of the Irish atmosphere to make us feel a sense of credibility in the Irish history portions. His dialogue is crisp without forcing the brogue and his ability to end chapters with a final sentence that links us securely to the next chapter is a true gift. This is a solid novel by a writer who obviously has ample talent to push him to the top of the heap of contemporary thriller/historic fiction writers. It will be interesting to learn the subject of his next novel – likely another sense of discovery. Grady Harp, June 16