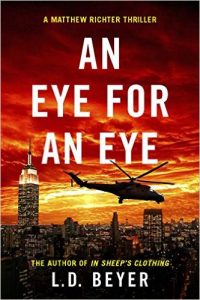 A powerful drug lord threatens to bring America to its knees. Only one man can stop him.

Two years ago, Secret Service Agent Matthew Richter faced the most difficult decision of his life, knowing that by saving the former, the latter would die. In the aftermath, he fled Washington and the agency that failed him. With wounds he’s certain will never heal, he seeks refuge behind a gun as the commander of an FBI SWAT team in New York. After a raid turns sour and Richter is sidelined, possibly for good, he is reluctantly drawn back to Washington by the man he once saved.

When drug cartels threaten to topple the Mexican government and the violence begins to spill across the border, Richter tells President David Kendall it’s time to take off the gloves. One by one, cartel warehouses and tunnels are raided and their drug caches destroyed. One by one, their sprawling compounds and bank accounts are seized. One by one, drug lords are targeted and killed. One by one—all except, that is, for Pablo Guerrero, the ruthless head of the Sangre Negras cartel, who has only grown stronger as others have fallen.

When the hunt for Guerrero finally draws first blood, he unleashes a war no one is prepared for. Now Richter must stop him before it’s too late.

AN EYE FOR AN EYE is available from Amazon.

“AN EYE FOR AN EYE is the second Matthew Richter Thriller offered by L.D. Beyer. I thoroughly enjoyed the first book in the series, In Sheep’s Clothing. So, I was expecting to enjoy this book as well. Well… I was not disappointed! Beyer elevates the franchise with this political/action thriller.

This L.D. Beyer guy may be on to something with this series.

As with the last book, it is refreshing to read fiction where the government is not populated by liars, cheats, and ego maniacal sleaze-balls. The politicians in this book are honorable people actually concerned with the welfare of the people. Well, it is fiction.

Matthew Richter is a well presented hero. He is not overly macho, not full of false bravado, not ego driven, not even a womanizer. He is a man uncomfortable with the mantle of responsibility placed upon him. Truly, the reluctant hero. His character is well developed, as are the other characters in this story.
. . .
If you are looking for an action oriented read that will play with your emotions, AN EYE FOR AN EYE by L.D. Beyer fits the bill admirably. Enjoy!” by the writers of Books are Theater of the Mind