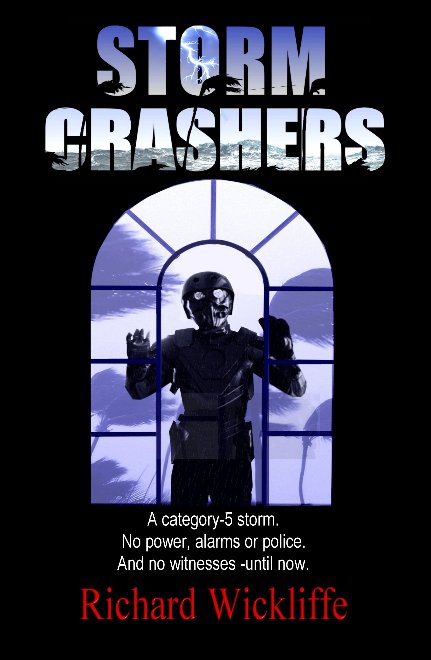 Richard Wickliffe was inspired by real-life crimes when he wrote his new crime-thriller STORM CRASHERS. The author answered a few questions for The Big Thrill on separating fact from fiction and on his unique route for acquiring a Hollywood option.

Tell us about STORM CRASHERS

The Storm Crashers are a team of high-tech burglars that target wealthy areas that are evacuated for approaching hurricanes. Imagine no electricity or police access. In my novel, STORM CRASHERS, one resident—a single mother—refuses to evacuate and witnesses the thieves. While trying to protect her daughter, she shoots and inadvertently kills one of them. When she reports what she saw to police, no one believes her story, and the crashers want to eliminate their only witness.

Concurrently, an investigator studies reports of thefts reported during the storm. He teams with a female detective who believes the woman’s story. Despite being reprimanded by their respective bosses, they unravel a mystery that exposes the origin of the thieves, and could ultimately impact our national security as a new Category 5 storm targets Miami.

As wild and unique as that seems, what were the seeds of truth behind the idea?

Hurricane Charlie had swept through Sanibel-Captiva islands off the coast of Florida, which is a primary setting in STORM CRASHERS. In the wake of Charlie, officials told residents they could not return to their homes due to damaged bridges, no power, or police access. I imagined how burglars could have a field day. I took that idea a step further, equipping them with night vision goggles, special gear, and so on.

In reality, many burglaries were reported during that period, including a pharmacy that lost a load of narcotics with a nearly priceless street value. I included that scenario in STORM CRASHERS. Police were amazed that criminals were so industrious during such harsh conditions.

Is there a setting or predicament that readers would be shocked to learn was true?

Yes, in my novel an abandoned hotel is used as a morgue. Of course, I depict it as a derelict haunted-house-like building, without power, containing rows of corpses. Astonishingly, this is based on something real. I once stayed at an older hotel on the west coast of Florida. After Hurricane Charlie, I was shocked to learn the vacant hotel had been used by city officials to temporarily hold storm casualties as they waited for refrigerated trucks. When word leaked to the public, officials had to confirm the corpses were in the hotel, but wouldn’t verify how many. Even more disturbing is the hotel has since reopened!  But I won’t reveal what it’s called now.

With thousands of writers hoping to have their story sold to a Hollywood studio, tell us the unique route you pursued.

I originally wrote STORM CRASHERS as a screenplay. As I began to write the novel, I shopped my screenplay to agents and producers as an unsolicited query, with no luck. With my story’s unique concept and action scenes, my son mentioned how it’d make a great video game. I’m not really a gamer, but I researched video game companies and found an entertainment company in L.A. that combined video games and films. I sent a query about my story, with an outline for a potential game.

Within weeks I received a personal phone call from a producer with the company. My story’s concept—high-tech thieves racing the clock as hurricanes approach—seemed perfect for game and movie potential. I went to L.A. and met the guys, who were fantastic. The project was ultimately pitched to several “big-six” studios, with 20th Century Fox offering a two-year option. I understood that Fox preferred an accomplished screenwriter, so a script was revised by another writer. Fox’s option encompassed the story, my screenplay, manuscript, and gaming rights. To date, it hasn’t been picked-up as a green-lit film, but I remain hopeful.

Did this delay the publishing of the novel version of STORM CRASHERS?

I learned that when I signed the option with Fox, it meant they legally owned all aspects of my project. When I told them I had a manuscript that was seventy-five complete, they replied, “We now own that too.” I literally had to leave my novel on my hard drive until the option expired. Fox did exercise an extension—which was a good thing—but it further delayed the marketing of my novel.

Were you worried about your idea being stolen?

I was wise enough to copyright my manuscript and I registered my screenplay with the Writer’s Guild of America. The high concept of thieves in a hurricane had never been filmed before and I was very protective of the idea.

However, I am a little bothered that in the past few months, no less than three new film projects are in the works about “thieves planning heists during storms.” In fact, two share the same title—very little originality.

Do you think your idea was stolen or at least it inspired others?

It’s hard to protect just an idea. Like two movies released about a meteor heading towards earth. But put it this way: my concept had never been done in seventy-five years. Then my STORM CRASHER project was shopped all over L.A., which meant studio execs and agents read or discussed it around Hollywood. Now, suddenly three films pop up. Very coincidental. I just hope they don’t butcher the concept, since I still have hopes for my original story.

As I hope the cliché goes: “The book’s so much better than the movie…”

Thank you, Richard, for speaking with The Big Thrill. 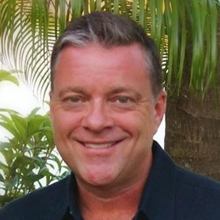 This is Richard Wickliffe’s third novel, which was inspired by actual crimes and was originally optioned by a major film studio. Rich enjoys speaking about creative and unique crimes, including twice at the FBI’s InfraGard Counterterrorism conferences, to the U.S, Coast Guard, and on panels at seminars in Las Vegas dedicated to accuracy in crime writing. His first crime novel, Tropical Windfall was published as the result of an Amazon crime writing contest. Rich’s writing borrows from the unique (scandalous, criminal or satirical) environments of South Florida where he resides with his family.

You can find out more about Richard Wickliffe’s books on his website or about the novel STORM CRASHERS on Amazon or on its page at StormCrashers.com.