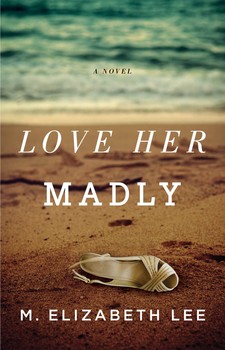 LOVE HER MADLY, the debut novel by author, M. Elizabeth Lee, is more than a thriller—it examines the demands inherent in meaningful relationships and just how much one is willing to sacrifice for the sake of true friendship.

Glo, Cyn, and Raj are college students whose lives become entwined through the love they feel for one another. At first, their unorthodox relationship seems to work, but when Cyn disappears while on a trip to Costa Rica, things get complicated.

This month, I chatted with Lee to get the scoop on what inspired this thrilling debut, and what readers can expect from her next.

What inspired you to write LOVE HER MADLY?

The seed of the novel came to me when I was backpacking in Costa Rica with my husband. We had this long day of terrible travel luck, trying to get from one distant town to another with buses that were late or didn’t arrive at all, leaving us scrambling to find our way down the coast.  Sixteen hours or so of bumpy bus rides and sweltering waiting rooms provided a lot of time to daydream, and somewhere between the second ferry trip and the hour-long slog uphill to our hostel, the idea of a romantic rivalry, where one friend goes missing and the other is left to explain, had taken root.

Were any, or at least one, of the main characters in LOVE HER MADLY based on someone you know?

I didn’t model any of the characters after anyone I’ve known. They are pure inventions who began as little more than the bud of an idea; Glo the “good girl”, Cyn, the “wild one,” who burst to life in my imagination as the story gradually took shape. I don’t know where exactly they came from, but their personalities seemed fully formed. It was my job to put them on the page, and I immediately knew when I had taken a false step, almost like they were standing behind me shaking their heads. The intense friendship between Glo and Cyn is the beating heart of the novel, so it was immensely important that they ring true. Female friendships are so monumental, yet the lasting effects of losing a close friend are seldom explored as thoroughly as the consequences of a romantic breakup. LOVE HER MADLY aims to show how this type of loss can really change a person and the way they see the world.

Was there a reason you chose to write your story in the first as opposed to the third person?

I felt that this book needed the immediacy of a first person narrator to capture the heightened emotions incited by both the love triangle and its violent repercussions. Having Glo tell the story both in college, when her feelings run so hot, and later on, when she’s a little wiser and warier, was important to me, as was presenting Raj’s perspective on the relationships. Within the book’s love triangle, each character has so many desires and fears that they keep hidden. As those layers are peeled away in the second half and fresh truths revealed, I wanted the reader to be able to experience the shocks and surprises in tandem with our narrators. As a reader, I love how moments, conversations, even entire friendships can appear in an entirely different light with a little new information, and I wanted to foster that experience with LOVE HER MADLY.

Was this your original ending or did you ever consider another?

This book went through several drafts and one extensive reshaping. There were a few different takes on the ending, and they all had their merits, but eventually you must choose only one! In an earlier draft, I composed a very long, very detailed letter from Cyn penned around the time of her disappearance. It didn’t make the cut, but I learned a lot about Cyn by going through the process of writing it. I’m sure I’m not the only writer who finds endings difficult. As a reader, the ending is inevitably the worst part, even more so if the book is really excellent. When a writer’s done the job well, even the best ending feels disappointing because all a reader wants is for the story to continue.

Both genders were given a voice in your novel.  Did you feel equally as comfortable writing from a man’s perspective as from a woman’s?

I didn’t find it difficult to write as a man. I delight in writing female characters with strong personalities, but I really like writing male characters too. Raj was a pleasure to work with because I dropped a lot of my own ID into him and then put him through the wringer. My background is in acting, and so is Raj’s. He’s struggling to tell good stories with his theater company and failing at it, which is definitely a situation that I have been in before. I think readers may be inclined to “take sides” with Glo because she dominates the first half of the book, but I wanted to disrupt that impulse by providing Raj’s point of view. Like any human, Glo’s perspective is distorted and subjective. She’s not an unreliable narrator, per se, but it becomes evident that she and Raj have a very different take on Cyn. 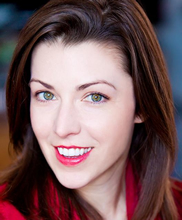 M. Elizabeth Lee is a screenwriter, actress and novelist based in New York City. She studied Literature and Theater at New College in Sarasota, Florida, and acting at The Stella Adler Studio of Acting. Elizabeth has appeared in numerous independent film and web productions with directors from all over the globe. Projects she has starred in have screened at the Buffalo Independent Film Festival, Coney Island Film Festival, NewFilmmakers NY, and KIN International Film Festival to name a few. She has also written numerous screenplays in connection with Cold Hands Productions, two of which, the horror-comedy Eat Me! and the psychological thriller, Off Season, have been produced and are enjoying nationwide distribution. Love Her Madly is her first novel.