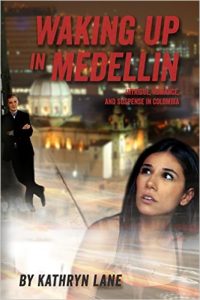 Nikki Garcia, an American woman, arrives in Medellin, Colombia to investigate allegations of fraud against the General Manager of Amazonia Steel, a local affiliate of the multi-national corporation where she works. In her ensuing investigative work she connects two accidental deaths at the Company to a much darker plot involving the man under investigation. Feeling in over her head, she hires a former CIA operative to assist her. Nikki also meets a medical doctor she soon finds herself falling in love with until she is kidnapped and wonders if he is also part of the sinister plot threatening her life.

WAKING UP IN MEDELLIN is available from Amazon, Barnes & Noble and Pen-L Publishing.

Waking Up in Medellin kept me guessing in a genre I’d never even thought about before: the corporate who-done-it. Nikki Garcia is an unlikely Sam Spade: a sexy traveling auditor who accepts no spread sheet at face value as she grapples with high level, mega-money corruption, and her own ghosts. Kathryn Lane has crafted a savvy, engaging character and placed her in fast paced thriller with an edge-of-your-seat finish, and managed at the same time to introduce me to two new worlds: the labyrinthine back room treachery of international business, and the exotic tropical atmosphere of contemporary post-Pablo Escobar Colombia. Did I mention there’s a love story? Or is it a story of heartless manipulation? Read Waking Up in Medellin to find out. I’m hoping in the future to see more of the globe-trotting adventures of Nikki Garcia. Amazon Customer

Originally from Mexico, I wanted to be a painter in oils but quickly changed to accounting and international finance after I discovered the path to painting lead to a starving artist existence.

To cement my ability to earn a living, I became a CPA and a CMA and worked for a multinational corporation where I traveled extensively for several years. After jetting to over 90 countries, I realized my travels gave me the opportunity to fulfill another passion – to write fiction. I find inspiration not only from my travels but also in the Latin American cultures and customs so familiar to me. If you read my short stories, you may find the occasional fusion between fantasy and reality, often layered with symbolism punctuated with occasional hints of surrealism.

My novel length fiction, by contrast to my short stories, falls into the mystery genre with romance interwoven in the story, as in Waking Up in Medellin published by Pen-L Publishing in March 2016. The protagonist Nikki Martinez, an American woman from Minneapolis, Minnesota, travels to Colombia in South America to investigate fraud. She uncovers far more than fraud and finds herself caught in a web of deception and life-threatening experiences.

My short stories are published in The Texas A&M New Border Voices (Anthology); Swirl Literary Journal, Lone Star College, TX; Arriba Baseball! from VAO Publishing and The Alamo Bay Writer’s Anthology, Alamo Bay Press.
The Association of Writing and Writing Programs (AWP) featured me as a reader on the panel of Arriba Baseball! at the Seattle conference in February 2014. I read and discussed my story, Baseball Over the Moon which appears in the anthology.

I serve on the Board of the Montgomery County Literary Arts Council and I reside in Texas with my husband Bob Hurt.