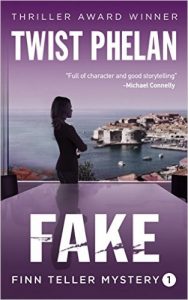 Have you ever thought about buying a counterfeit product? Maybe a watch or a handbag for fun? After you read FAKE, the first book in Twist Phelan’s series featuring Finn Teller, corporate spy, you’ll think again.

An assignment with a Milan fashion house leads Finn to an undercover investigation of a train wreck in Croatia—scene of her most tragic professional mistake and home to terrorists still out for revenge. The hunter becomes the hunted and the stakes skyrocket as Finn must win a race against the clock to stop the spread of a deadly African pandemic and escape with her life.

FAKE is available from Amazon.

Her short stories and novels have won awards, been featured in “Best Of” compilations, and been praised by Michael Connelly, Sue Grafton, Margaret Maron, Publishers Weekly, Library Journal, Kirkus Reviews, and Booklist.