Tossing Off the Security Blanket 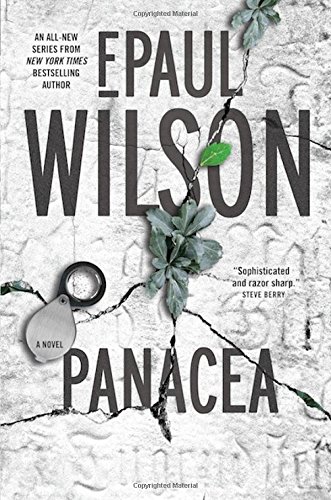 Okay, it seems every time you turn around, someone is starting a new series, and here you’ve gone and stopped one. Repairman Jack has such a wide and loyal fan base, all I can do is scratch my head and ask why?

Yeah, I know. It seems like a dumb idea. I remember mentioning to Lee Child that I was planning on shutting down the series and he said, “Why would you ever want to do that?”

Good question. I have to admit that on the surface it makes no sense. Not many authors have a security blanket like Repairman Jack, where both the publisher and the readership want another installment every year. But like the man says, “Know when to hold ’em, know when to fold ’em.”

What made you decide it was folding time?

Let’s go back to The Tomb, the first Repairman Jack. That started out as a standalone novel, but by the time I finished I knew I had a series character. I did not want to write a series back then. I had other standalone titles pretty much written in my head and I saw a series as a trap, something that would take over my writing career. So I left Jack dying at the end. But The Tomb hit the Times paperback list and folks started calling for another Repairman Jack. I ignored them. The Tomb remained in print, however, and year after year the fan base grew.

By the late ‘90s a number of factors created a situation where a second Repairman Jack novel made sense. So in 1998, fourteen years after The Tomb, Legacies hit the stands. Its success spurred demand for more so I gave in and committed to the series. But I intended from the get-go that Jack would have a limited run to a predetermined finale.

Eventually I reached a point where I could either let the series follow its course to a natural conclusion or keep pumping out a new installment year after year (or hiring someone to do it for me) simply to collect another paycheck.

You wouldn’t be the first.

Don’t I know it. We’ve all seen beloved characters pushed way past their expiration date to the detriment of the series as a whole. I didn’t want that to happen with Jack. He’s too important to me. Along the way I’d structured each novel to deal with a standalone problem while advancing the backstory. But as time went on, the backstory became the front story, and that was when I knew I had to close the cover.

So instead of a new Repairman Jack you give us PANACEA.

PANACEA is a novel I’ve been dying to write. The inspiration struck in 2005 but I was so involved with the Repairman Jack books (writing his adult novels as well as his teenage adventures) that I had to put it on the back burner. Which worked to the novel’s advantage. All those years of slow roasting helped me hone the backstory to a razor’s edge.

Okay, but a panacea is a cure-all, which is scientifically impossible. You have a scientific background. How did you reconcile that?

It wasn’t easy. Frankly, if I hadn’t left it simmering for so long, I might not have found a way around that wall. PANACEA is Laura Fanning’s story: She’s approached by a very rich man who’s terminally ill and thinks he has a clue to the whereabouts of the legendary panacea. He makes Laura an offer she can’t refuse to go find it. The mysterious Rick Hayden is assigned to protect her along the way. All fine and good, but I was having trouble buying my own premise.

That’s a real problem. If you can’t believe it, how can you convince your readers?

Exactly. Then one morning at 3 a.m.–when I’m often awake in the dark, working out plot problems–Rick started whispering a weird theory in my ear. He nudged me into one of those wonderful and too-rare eureka! moments when everything falls into place. Rick’s oddball views on the nature of reality altered the story’s course in a direction that gave me a way to accept the existence of a panacea (at least within the internal logic of the tale). This was crucial, because now that I’d bought into it, I could sell it.

Just a bit of it. He starts with the Fermi Paradox or the Great Silence, which boils down to: Where is everyone? With billions of Earth-type planets in our galaxy with the potential for supporting life–many of them much older than ours–why haven’t we been contacted? The answer could be that sentience and sapience don’t occur very often in the universe. As Rick says, “What if the human level of sapience is so rare that when it occurs it attracts…attention?”

Isn’t that a creepy thought? Remember the second part of the Chinese curse? May you come to the attention of one in authority. That has always given me a chill. What if we are under the scrutiny of (to quote Wells) “intellects vast, cool and unsympathetic”? Lovecraft and Charles Fort mined that vein, but there’s still plenty of ore left in it.

Do you answer the question?

Well…no.  I very deliberately sidestep an answer, relegating it to the background. Because that’s not what the novel is about. I’m more concerned with how something like a panacea impacts lives, and what people will do to possess it or suppress it. But Rick’s theories supply a nifty premise to play with as a subtext.

Sounds like quite a departure from the Repairman Jack novels.

Not so much as you’d think. Yes, it’s a mystery-adventure that hops from continent to continent in its quest, but (surprise!) Rick wound up with a few of Jack’s traits. And the whole scenario fits nicely into the Secret History of the World I’ve been compiling over the years.

Will we ever see another Repairman Jack novel?

I’ve been in this game a long time, and I’ve learned never to say never. If a story pops up that’s right for Jack (and there’s one in the mental Dutch oven now), I’ll write it. But I’ve just completed the sequel to PANACEA with more to come, so Jack will stay on vacation. After 23 novels and a raft of short stories, he’s earned a rest, don’t you think?

Ann Voss Peterson is the author of over 30 novels and has millions of books in print all over the globe. Winner of the prestigious Daphne du Maurier Award and a Rita finalist, Ann is known for her adrenaline-fueled thrillers and romantic suspense novels, including the Codename: Chandler spy thrillers she writes with J.A. Konrath and her own thriller series featuring small town Wisconsin police chief Val Ryker. The third book in the Val Ryker series, Dead Too Soon, was released in May of 2016.

The Hooker by Simon Wood

The July 2016 Edition of The Big Thrill is Here!