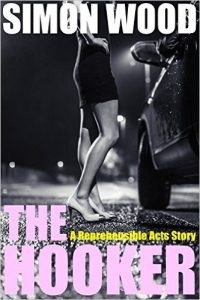 In this novelette, Mark was content to see out his single days with a bachelor party, but his best man, Lance, wasn’t. He insists in sending Mark off in style…in the company of a hooker. It’s supposed to be the last hoorah of a single man before being condemned to a life of marriage, but that all changes when the hooker scams them. Mark’s world unravels and a dark side he never knew he possessed spills out.

The Reprehensible Acts series features stories without heroes or happy endings in most cases. These stories feature characters that lose their way and may never find their way back. You can’t condone their actions, but perhaps you can have sympathy for their damaged souls. You might find these stories unpalatable, but then again, you’re not meant to. Don’t judge. No one is immune to committing a reprehensible act.

THE HOOKER is available from Amazon and Amazon UK.

Simon Wood is a California transplant from England. He’s a former competitive racecar driver, a licensed pilot, an endurance cyclist, an animal rescuer and an occasional PI. He shares his world with his American wife, Julie. Their lives are dominated by a longhaired dachshund and four cats. He’s the Anthony Award winning author of Working Stiffs, Accidents Waiting to Happen, Paying the Piper, Terminated, Asking For Trouble, We All Fall Down and the Aidy Westlake series. His current thriller THE ONE THAT GOT AWAY has been optioned for a movie adaptation. His next book DECEPTIVE PRACTICES will be out in November 2016. He also writes horror under the pen name of Simon Janus. Curious people can learn more at http://www.simonwood.net.

Obsessed By Darkness by Autumn Jordon

Get It Right: J.J. Hensley