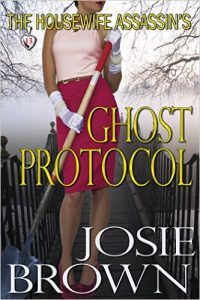 IN BOOK 13 OF THE HOUSEWIFE ASSASSIN SERIES:
Donna Stone’s mission: investigate the resurrection of known terrorists who were thought to be dead and buried. But when vital intelligence leads them to a group of domestic-based terrorists who are planning major attacks throughout the United States, a political enemy of the president of the United States provides evidence that Acme is involved. President Chiffray has no other option than to initiate ghost protocol, dissolving the black ops organization. To save their lives and their country, Donna and Jack must go under deep cover to seek out the true spooks betraying America.

THE HOUSEWIFE ASSASSIN’S GHOST PROTOCOL is available from Amazon, Barnes & Noble and iTunes.

Josie lives in San Francisco with her husband and two children.
You can reach her via her website: JosieBrown.com and HousewifeAssassinsHandbook.com