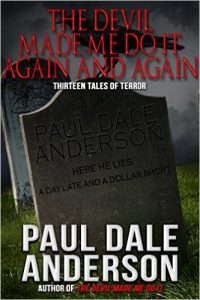 Here are thirteen tales to scare the pants off you. Ten of these stories by master of the macabre Paul Dale Anderson previously appeared in horror magazines and anthologies, and three are original to this volume. The Devil Made Me Do It Again and Again also includes Paul’s brief introduction to each story, a new forward by Irwin Chapman, a preface and afterwords by the author, and some secrets never before revealed.

Stories included in this collection:
After the Fall
Dolls
Who Knows What Evil Lurks?
Screw Ups
I’ll Show You Mine
The Last Straw
Better Than One
What You See

THE DEVIL MADE ME DO IT AGAIN AND AGAIN is available from Amazon and Barnes & Noble.

I love to read and write horror, dark fantasy, thrillers, and science fiction. I am an Active member of SFWA, HWA, MWA, ITW, and Authors Guild, and I was previously represented by Barbara Puechner of the Peekner Literary Agency. When Barbara died with my breakthrough novel still half-finished, I switched to writing non-fiction. I went back to college and earned an MS Ed. and most of a doctorate in Educational Psychology and I earned an MA in Library and Information Studies from the University of Wisconsin. I taught creative writing for Writers Digest School (both Novel and Short Story) and for the University of Illinois at Chicago.

I returned to fiction writing with a vengeance in 2012. I completed my breakthrough novel and seventeen other novels, and I began writing fresh fiction that crossed genres.