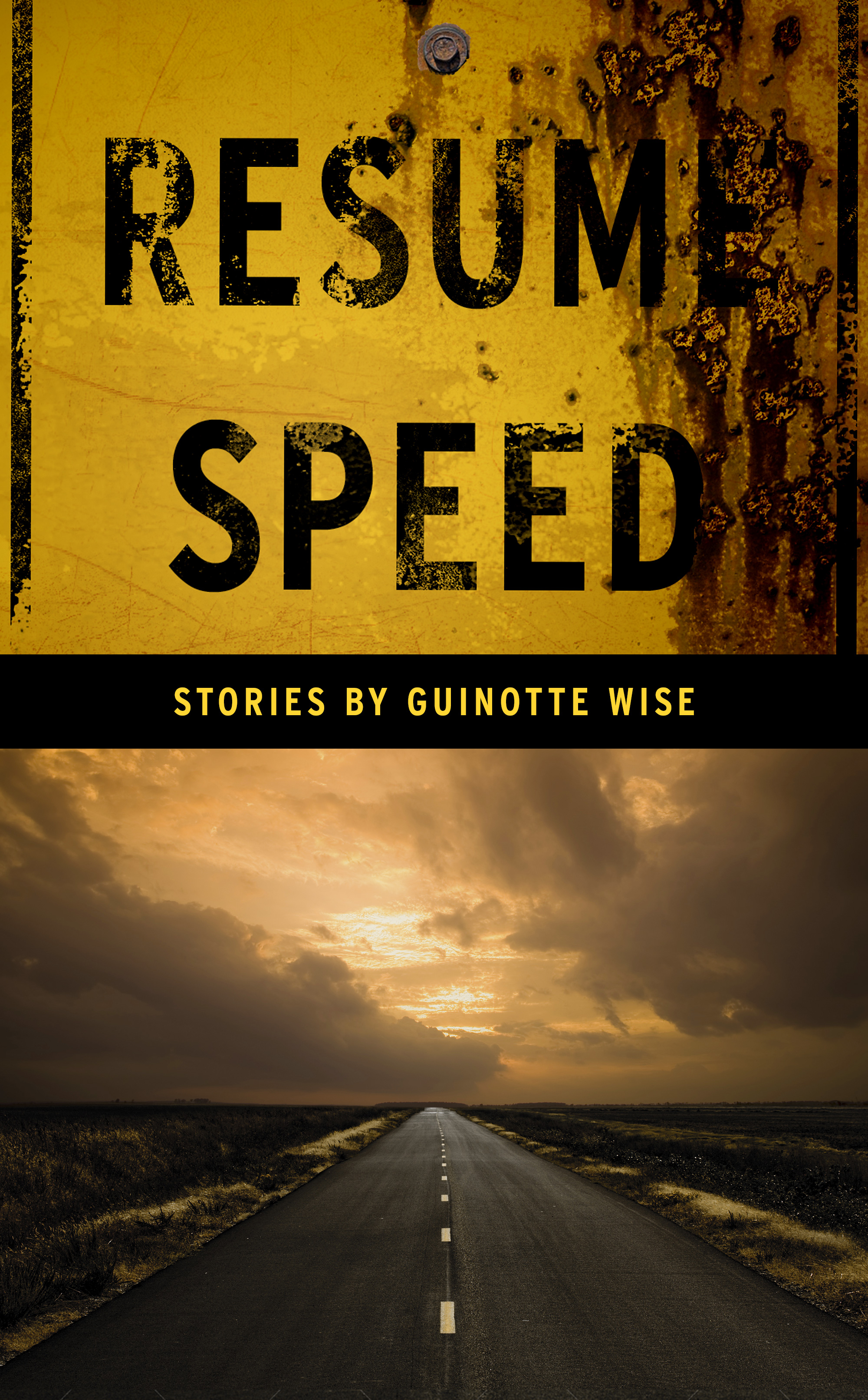 Guinotte Wise has managed to cram a lot into the anthology, RESUME SPEED. I’m not normally a huge fan of anthologies; don’t get me wrong—I like short stories. But usually I end up reading a few stories and then go back to a novel and bounce back to the anthology after each novel. This usually means I lose track of any trend or glue that holds the anthology together.

In this anthology, though, the stories are slices of life and stand very much on their own. The fact that Wise has had many jobs comes through in every story, where he invites us to a bar or a funeral home, and oozes realism.

His last anthology was described as cinematic, compared to a Tarantino movie. This is well deserved. The scenes are set simply and accurately and the reader feels as though they have come in from the street and is already seated at the bar Guinotte describes. You can smell the alcohol soaked into the wood of the bar, a stray wisp of cigarette smoke, even hear a cough from the back of the room. Dialogue is never strained. Characters interact as you would expect them to, and the author pulls from his own experiences to ensure that each story has a realistic flavor to it, with just enough quirkiness to keep us guessing.

The writing is clear and seeps talent. You settle yourself, allow yourself to wallow in their storylines, and they end far too soon. Not that the story is not finished—I would just have liked to stay a bit longer in each scene. Characters are well drawn, obviously taken from the many people Wise has met during his varied career, and I was riveted to each story.

Wise has been a creative director in advertising most of his working life, he says, and I can see how he has been successful in this. He plays with words and our emotions, shocking, cajoling, and urging us to read one more story before we put the book away.

I managed to catch up with Wise this month and he kindly took some time out to give The Big Thrill  some background and insights into his thought processes.

Can you give us an understanding of how your writing process works?  Do you have a ritual, do you plan out every detail, or do you see where the story leads?

If there’s a ritual, it involves coffee and dogs first. They see the coffee pour and they’re on me for a stroll. I take that first cup outside and we all go out front and bark and roll and do business (they do), then we head out back and explore some woods and wilderness areas. I think my inner guy is coming up with stuff during these strolls. Then I sit and look at the screen. Sometimes things happen. And, no, I surely don’t plan every detail–I go where it leads me. I rarely know how the story ends. Never, in a book. Hardly ever in a story.

This anthology has been compared to Quentin Tarantino style films—not a bad description for anyone. The book certainly is very visual. How do movies influence your writing and what are the keys to creating a visual story?

The collection “Night Train, Cold Beer” was compared to Tarantino films, but this one (RESUME SPEED) has no blurbs yet. I do hope it’s seen as cinematic too, only more so. I did a lot of TV in advertising, and tend to think visually, and you had to pack a lot into a 30-second commercial. I thought visually in radio too. The commercials were 60-seconds, and you could set up a visual experience with the right words and sound effects. Movies influence writing as well, and the best example I can think of is the absolute genius of Nic Pizzolatto in his first True Detective series. It’s the best thing I’ve ever seen on any screen. His book “Galveston” was also very visual and compelling. What a talent!

I think the key to writing visually, for me, is to close my eyes, hear, see, smell, and experience the scene. You’re in the scene. Again, I go back to TV commercials, like those I wrote for Toyota years ago in L.A. Few words spoken. The actions of the people, the car, the background had to work hard for those few seconds to have any impact. The first one I ever did was a Camry commercial. The thing Camry had going for it was it was that it was the most trouble-free car. We shot ithe commercial in Burbank in a neighborhood that could have been anywhere, Cleveland, Little Rock, anywhere, middle class homes, nice street. The Camry leaves, comes back, leaves, comes back several times, light to dusk, light to dusk. A neighbor is under his car’s hood. or trying to start his car. Always a bit frazzled. They wave at one another. No words, except that Camry is most trouble-free of any car in its class. Then it shows the neighbor with a Camry as well. He looks calmly beatific. End of commercial. Takes longer to explain than to see.

If I was writing that for a short story, I’d develop the two guys, maybe pull their POV’s into it, one a bit smug, the other getting more pissed at his car, his life. I wouldn’t have a happy ending.

I’m kind of neutral about e-books. My wife reads them, I don’t. I love books. I see my paperback of Ruined Days, a thriller, going for $15, and the e-book of it for $3 or $4 and I think, “well, nobody knows me, really.” Why blow 15 bucks on a paperback when you can read the thing on a Kindle or your phone for three bucks? I understand. But I always had to take that chance on a book, a “real” one. So, yeah, I’m more partial to books.

All the seasons have their allure for me but I find it hardest to concentrate when the geese are forming up and heading south. I just try to remember what Ron Carlson said, something like, “The best stuff I ever wrote was written 20 minutes after I wanted to leave the room.” That has some real wisdom to it.

You’ve given me no length requirements for that paragraph. So with my second-guessing and back-and-forthing it might be ten pages long. But for this collection of short stories, here’s what we’re probably saying about it:

Wise’s first collection of short stories, the award-winning Night Train, Cold Beer, was blunt, honest, cinematic. This collection, RESUME SPEED, is also visually keen and each story gives you the impression of having entered a town where, though the city limit sign welcomes you, something is amiss. As the story ends, you punch the accelerator to get to the next. From noir to ironic, flash fiction to longer form, RESUME SPEED is an odyssey of exceptional storytelling.

I always have time to read. I carry books in my vehicles for railroad crossings and traffic construction. As a kid I had to be stopped from taking comics to church. I enjoy Thomas McGuane, Pizzolatto (wish he’d write more books), Joan Didion, Truman Capote, Mary Gaitskill, Annie Proulx, Pam Houston, Barry Hannah, Bob Shacochis, Daniel Woodrell, Raymond Chandler, Flannery O’Connor, Joyce Carol Oates, Jim Harrison, oh so many great writers, many more. I take books everywhere: the doc, the dentist, lunch before the other person shows up, I read young kids, established authors, long gone folks. Anyone and everyone.

There appears to be a good theme of ordinary people in extraordinary circumstances in RESUME SPEED—who do you base your characters on?

I base them on people I’ve known who had an impact on me, people I’ve never known but would like to, people I’d never want to know. Maybe someone told me about someone back in the day and I forgot about it, but it bubbles up to the surface and I don’t know where it came from. Or I see someone in a store or a line. A woman I saw and heard in Brooks Brothers for less than a minute is in L.A. Hardscape, a book I’m working on. Not a minor role either.

That book I just mentioned, L.A. Hardscape. Here’s what I say about it on my website: A young boxer defies his mob owners and refuses to lose an upcoming fight. He becomes a killer by default, a landscaper by capability, and a private eye by choice. Stranger things have happened. On second thought, no they haven’t. Present day L.A. is the locale. 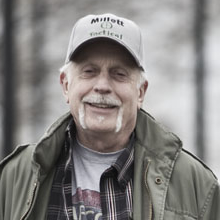 Guinotte Wise wrote a book (Night Train, Cold Beer) of short stories at his farm in Resume Speed, KS where he welds and writes. It won, got published to not much acclaim. It’s on Amazon. He got the soffits fixed with the money. Black Opal Books published his next book, a thriller (Ruined Days) also on Amazon and other booksellers. Black Opal is also the publisher of Resume Speed. Wise’s stories and poems have appeared in numerous literary reviews including Atticus, The MacGuffin, Prick of the Spindle and Best New Writers Anthology 2015. His wife has an honest job in the city and drives 100 miles a day to keep it.

To learn more about Guinotte, please visit his website.