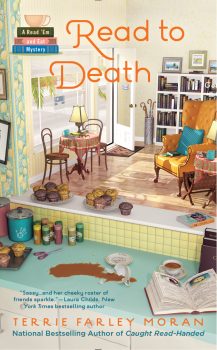 The third and most recent in the series, READ TO DEATH, centers on best friends Sassy Cabot and Bridgy Mayfield, who have relocated from New York to Florida’s Gulf Coast to open a bookstore café. Chef Miguel’s mouthwatering creations provide the proverbial icing on the metaphorical cake. You know a culinary mystery is good when just reading it makes you hungry.

A nationally bestselling author, Moran is the winner of the Agatha Award Best First Novel, and several of her short stories have been short-listed for other major awards. The only thing she likes better than grappling with mysteries, she says, is playing games with, and reading to, her seven grandchildren. Please join me in welcoming her to The Big Thrill.

Congratulations on your new book, Terrie! And thank you for taking the time to talk to us about it. Why don’t we start with a little bit about your writing journey and how you came to be a mystery writer?

All my life I planned that “one day” I would do two things—join a gym and write mysteries. When 9/11 reinforced that the only day that truly belongs to me is today, I was fortunate enough to be able to leave a great career, pick up some odd jobs along the way, and focus on writing mystery short stories and cozy novels.

I know your readers are glad you took that leap. You know, I’ve always thought that one of the most interesting aspects of being a writer is that each book gives you an opportunity to learn something new. What’s the most unusual thing you’ve ever done when researching a book?

I paddled a kayak on the Caloosahatchee River near Fort Myers Beach. Sassy and Bridgy go “suspect hunting” in a kayak in the first Read ’Em and Eat book and I wanted to get the feel of it.

I bet that turned out to be a fun scene—to write as well as to read. And speaking of writing, what advice would you give to aspiring and pre-published writers?

That’s great advice, but sometimes the temptation to procrastinate makes that easier said than done. Especially when the days get long, and the swimming pool looks so cool and inviting. When the summer weather beckons, what strategies do you use to keep your “butt glued to the chair?”

Well, about six years ago I very wisely bought an air conditioner for the tiny room I call my office. That has been a major help. At least six days a week I follow the writing “tip” attributed to William Faulkner. “I write only when I am inspired. Fortunately, I am inspired at nine o’clock every morning.” I wake up, exercise for half an hour and then I sit at the computer, taking a five minute “walk around the house” break every hour. I stop briefly for lunch. General I work all day regardless of the season. I will admit working in the summer was a lot tougher before I bought the air conditioner.

You not only have to think about writing the story, but since READ TO DEATH is a culinary mystery, you also have to come up with the recipes. Could you share one of those recipes with us, one that has significance both to the book and to you as an author?

When Sassy Cabot and Bridgy Mayfield left Brooklyn to follow their dreams, Sassy’s dream was to open a bookshop while Bridgy wanted to run a breakfast and lunch café. With a mingling of ideas, they designed the Read ’Em and Eat Café and Bookstore in the sunny resort town of Fort Myers Beach, Florida, nestled in the barrier islands of the Gulf of Mexico. The café has tables named after authors, with laminated tops displaying snippets of their work.  Book clubs meet frequently in the section lined with bookshelves, and of course book-related menu items such as Old Man and the Sea Chowder, which made the cut because I adore Ernest Hemingway, who spent more than a decade of his life in Florida.

The recipe below, which is also printed in the back of the book, is an example of the consistent tie-in of food and books within the series. In READ TO DEATH, a kind and patient man, Pastor John Kendall, who has the most annoying wife, has organized a clergy luncheon at his house but has no meal to serve. Readers love Pastor John and generally have strong opinions about his irritating wife Jocelyn. Sassy saves the day by delivering chowder, Drunken Raisin Scones (recipe also in the book), My Secret Garden Salad, and pecan pie. Here’s the Hemingway-inspired recipe:

OLD MAN AND THE SEA CHOWDER

1 dozen shrimp, cleaned, deveined and cut into two or three pieces each

That sounds delicious! But I know you have a lot of irons in the fire. What’s next for you?

I am presently working on a proposal for a new cozy series, tentatively called the Arts and Drafts series and I am writing several short stories. Crepe Factor, the next book in the scrapbooking mystery series I co-write with the magnificent Laura Childs, will be released in October.

Art and scrapbooking? Those sound like they could inspire some fun, creative mysteries. In the meantime, I’m off to make some Hemingway chowder. Thanks again for joining us!

Thanks so much, Jaden. This has been great fun. 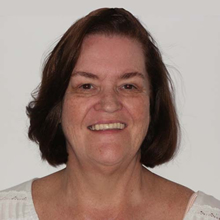 Terrie Farley Moran is the best-selling author of the Read ‘Em and Eat cozy mysteries series. Well Read, Then Dead, winner of the Agatha Award for Best First Novel 2014, was followed by Caught Read-Handed in 2015. Read to Death will be released in July 2016.

Terrie’s short mystery fiction has been published in Ellery Queen Mystery Magazine, Alfred Hitchcock Mystery Magazine and numerous anthologies. Her short story, “A Killing at the Beausoleil” prequel to the Read ’Em and Eat novels, has recently been nominated for an Agatha Award for Best Short Story.

The Body Reader by Anne Frasier