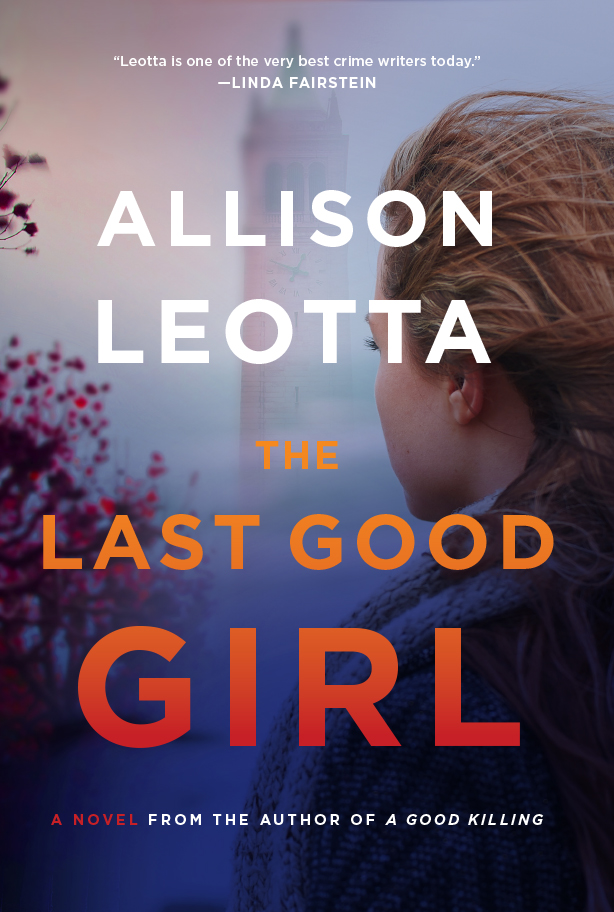 Allison Leotta is a former federal sex-crimes prosecutor in Washington, D.C. who now writes kickass, ripped-from-the-headlines thrillers. She has been called “the female John Grisham.” She has also been called “someone who tolerates Brad’s presence at the bar at ThrillerFest.” Therefore, they decided to sit down for this electronic chat about her latest novel THE LAST GOOD GIRL.

We’ll get to the serious subject of this terrific novel in a moment. But first: You write at your kitchen table. In order to be more in tune with you, I am writing this interview at my kitchen table. I can report it’s a typical day for my kitchen table, which means it currently contains: my children’s breakfast dishes and their contents (unfinished oatmeal, half-eaten biscuit); a stack of baseball cards; a purple sweater; nation cards from the board game Axis & Allies; some bills (unpaid, of course); and a plastic Minny Mouse cup that has some kind of bug crawling on the rim. What’s on your kitchen table right now?

Lovely! The bug is a nice touch. I’ve got: a glass bowl full of murky water and one immortal goldfish. A vase of dessicated flowers from my husband, to mark our (14th!) anniversary. I should clean it out, but there’s something about dead roses that’s perfect for a mystery writer (and, ok, honestly, it’s pretty far down on my to-do list; I’ll get to it after I change the poor fish’s water). Paint pens for my kids to decorate the Little Free Library we just installed in our yard. A game of Monopoly, mid-play (I’m the thimble, losing big time to my 9-year-old mogul, the cat). Soggy Cheerios, obviously.

Learning how to lose graciously at Monopoly is one of the real keys of parenting (hint: when you land on Park Place, say, “Oh, that’s okay. I’ll pass.”). How do you concentrate with all that crap around you?

I don’t. I’m at Starbucks. I appreciate that you know about my beloved kitchen table, but I’ve  made some changes. Ever since I saw a kid steal a computer right from under the hands of a coffee-shop patron WHILE the poor woman was typing, I’ve been remarkably productive in public places. You know the old ass-in-chair advice for writers? Well, nothing keeps your ass in that chair better than the fear of losing your laptop to the local heroin addict. I write like a demon at Starbucks.

Yes, but the barista still thinks his fan fiction is better. Switching topics… Up until five years ago, when you walked away from a perfectly good job at the Justice Department to write novels—crazy! who does that?—your professional writing experience consisted of legal briefs. After five years as a novelist, how has your writing changed?

I get paid less for it.

Uh, excuse me, I believe I’m supposed to be playing the role of the wiseass here. Fine, fine. I was going to pay you a compliment—that I feel like your writing has grown, that you’ve become quite an assured crafter of prose—but we’re going to skip that now and move on. This is the fifth book featuring sex crimes prosecutor Anna Curtis, but to me it reads like a standalone. Was that intentional?

For sure! This is a business, and business is better when readers can jump right in to your latest release. I make each book in my series work as a standalone. I’ve had a lot of people start with, say, book four, then love it and go back and read the first three.

Okay, so how to put this… Oh, heck, I’ll just be indelicate: Anna is a sex crimes prosecutor, which means she sees the worst side of the human sexual animal. And yet she also has a love life and even (gasp!) has sex. How do you balance those that?

I think Anna’s happy, healthy love life is important, for two reasons. First, I don’t want to talk only about the bad sex, the assaults, the nightmares. Sex can and should be one of the best things in life. It’s not fair to sex to write a whole novel dwelling on the worst of it without at least giving a nod to the best. Second, that’s who Anna is.  She is a professional who prosecutes these crimes, but at the same time she’s a young, single woman in DC, trying to have a love life. It’s a place my friends and I were all in – dating, getting married, planning families, all while prosecuting sex crimes. It’s a unique POV, and an important part of my protagonist’s character.

Also…oh heck, I’ll just be indelicate too: I’m pretty good at those scenes. When my first agent, the late great Elaine Koster, offered to represent me, she said, “I have to take anyone who can write a sex scene like that.”

[Furiously running to his shelf, finding Allison’s debut—which she never did sign for me—and putting it away for a day when I need a pick-me-up]. Okay, so onto THE LAST GOOD GIRL. It’s pretty intense—as a good thriller should be—and it deals with a very charged, very timely subject, campus rape. What made you want to write about that issue?

There’s an epidemic of sex assaults on college campuses today. One in five girls, and five percent of the boys, will be sexually assaulted before they graduate. This is a life-changing crime happening to our sons and daughters in what should be one of the best times of their lives.

And the way that some colleges have handled these reports is outrageous. Many report zero rapes every year. The math doesn’t add up. Universities that report zero sex assaults are either oblivious or lying. And sometimes worse. Did you read the story last week about the girls at Brigham Young University? They reported to the college that they’d been raped—and the college expelled them for violating the school’s honor code.  It’s barbaric.

It’s something we need to talk about.

Alright. So let’s talk. You and I are roughly the same age (even though everyone would think you’re much younger… not that it makes me resent you or anything). When we went to college in the 1990s, sexual assault on campus was just starting to emerge from the shadows—we had blue light phones, Take Back the Night rallies, that sort of thing. Yet sometimes I wonder: Have things gotten any better in twenty years? Or have we stagnated or, worse, regressed?

All of the above. Those efforts in the 90’s were helpful, but we didn’t quite understand the dangers. When I was in college, everyone worried about the stranger in the bushes, hence those blue lights. That lurking boogeyman was the one we were “taking back the night” from. I was advised that if I had to walk home late at night, never do it alone, have a nice male friend escort you. What I’ve learned since is that nice male friend is far more likely to assault you than anyone hiding in the shrubbery.

The vast majority of sex assaults, and especially college sex assaults, are committed by someone the victim knows – another student usually, maybe even someone you had a crush on. That cute frat boy, the star lacrosse star, your RA. They’re not going to break in through your window—you’ll let them in your door. And that makes things so much more complicated for survivors, who often feel guilt because they liked the guy, or don’t want to rock the boat socially.

And it complicates things for colleges, which have had serious problems with their ability to fairly adjudicate between two of their own students. Many survivors report feeling raped a second time, by their college’s indifference or antagonism. There’s the additional problem of powerful institutions like fraternities and sports teams lining up to protect the accused.

That said, there are some fascinating solutions. Today’s activists are so good at using social media to make their message go viral. They’re forcing a conversation about a crime that has thrived in silence. And the fact that we’re getting more reports is, I think, a good thing.  It doesn’t necessarily mean more assaults are happening. It means more survivors are finding the courage to come forward.

That brings me to my alma mater, Dartmouth College, where applications for the Class of 2018 dropped 14 percent after a year of high-profile student protests about the handling of sexual assault cases. With that as a backdrop, can college administrators possibly be evenhanded in how they adjudicate these cases? When there’s an accusation, isn’t there a tremendous pressure for them to grab a broom, start sweeping, and hope the victim stays quiet?

You got it. There are over 150 colleges under federal investigation for violating Title IX (which requires schools to prevent sexual harassment on campus) or the Clery Act (which requires them to report the number of crimes on campus every year).

Any time you look at how a system is working, you have to look at the incentives. There’s a huge incentive for colleges not to find rapes, to discourage survivors from coming forward, and to find the suspects not responsible.  No college wants to be known as Rape U.  No parent wants their kid going to a school with a rape problem.  Then brilliant young students like yourself might not apply, and Dartmouth would lose some of their brightest stars.

In cases of acquaintance rape, which this book deals with, there are always going to be  cases with a real dearth of evidence, where it essentially comes down to he-said-she-said. As a prosecutor, how did you deal with those?

Often, it doesn’t have to be he-said-she-said. A good investigator may find more evidence if she only looks. A bar tab, eyewitnesses at the bar, text messages, emails, Tweets, Instagram pictures. The kids in the adjacent dorm room who might’ve heard stuff through the wall. Campus security video. Statements the suspect himself made to friends the next day. A taped phone call where the survivor asks why he did it – and he admits what happened. You dig around, and often you can come up with more than just he-said-she said. That process, at its best, is kind of like the unfolding of a good mystery novel.

Well, exactly. And I have to think, if we’re talking and thinking like writers now, that the uncertainty—who’s lying? who has what to gain?—is the best thing ever. The reader doesn’t even know who the victim is. Is it the woman who has been raped? Or is it the man who has been falsely accused? That has to open up some real possibility, yes?

No spoilers here. I plead the Fifth. 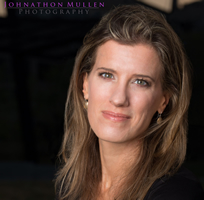 Allison Leotta is a former federal sex crimes prosecutor with degrees from Michigan State and Harvard Law. Her thrillers have earned starred reviews and appeared on “best of” lists by publications including Library Journal, Strand Magazine, Suspense Magazine and O, The Oprah Magazine. Her latest, THE LAST GOOD GIRL, just released from Simon & Schuster.

Brad Parks is the only author to have won the Shamus, Nero, and Lefty Awards. His next thriller, SAY NOTHING, will be published by Dutton in March 2017.