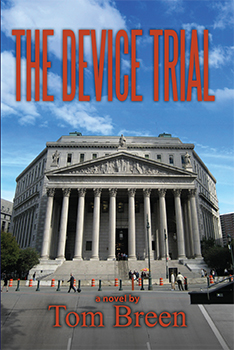 New York City attorney Tom Breen’s second courtroom thriller, THE DEVICE TRIAL, will be released by Pegasus Books in early June. In this cliff-hanger, New York attorney Brian Bradford faces off against a large medical corporation and its sociopathic CEO in a dangerous battle of wills. Like his debut novel, The Complaint, Breen’s new release draws on his intimate knowledge of judicial proceedings to deliver a story rich in realism and complex characters.  His unique touches include presenting trial testimony in the format of an actual trial transcript.

We interviewed Tom Breen about his new work.

To Kill A Mockingbird.  You might question my assessment of that book as a thriller. While the outcome of the criminal trial had little doubt, the reader was nonetheless spell-bound as Atticus attempted to expose the truth of what occurred between Mayella and Tom. The post-trial ramifications of Atticus’ trial questions continued the suspense even after the guilty verdict was announced.

The book was also memorable because it was one of the few novels that provided actual trial testimony of witnesses during direct and cross examination, with courtroom comments by attorneys and the judge. It provided me with the idea to create my own replication of an actual trial and deposition. I attempted to enhance the realism by bringing the reader inside the courtroom through trial testimony in a question and answer format that mimics an actual trial transcript, along with the Judge’s on the record comments and rulings. I may be the first to attempt this in a novel, beginning with The Complaint and then THE DEVICE TRIAL.

Your lead character in THE DEVICE TRIAL fights against an amoral insurance company, but he doesn’t always stay inside the law himself. What are you trying to achieve here?

Brian sees his role as doing what’s necessary to bring justice to his honorable cause. When faced with resistance, he pushes back regardless of the rules. Because his adversary operates outside the law, Brian believes he must follow suit to succeed.  I wouldn’t teach this to a law school class, but hopefully it increases the entertainment value of the story.

There is a common perception that New York City courts are corrupt. How might THE DEVICE TRIAL affect that perception?

I don’t think the book portrays New York courts as corrupt—only New York lawyers. This is the common public perception of New York lawyers and I had great fun contributing to that image.

Your female characters are important allies for Brian Bradford. How do you expect male and female readers to respond to them?

Having raised two daughters who are now attorneys, my intent was to portray the female characters as bright, accomplished and resourceful women. This was consistent with my gender view, plus it worked well to offset Brian’s many character flaws, including his lecherous approach to all interactions with the opposite sex. For a married man, he says and does things that most would consider inappropriate. I think all readers will enjoy the female characters—they are independent and fully aware of what they want and don’t want.  Plus, they’re smarter than Brian and provide him invaluable assistance.

What is your favorite setting in THE DEVICE TRIAL, and what makes it special to you?

My favorite setting is Brian’s trip to Long Bay in Tortola. It is a spectacular place on the beach, next to the turquoise sea and a grove of palm trees.  We had a family reunion there and my wife and I stayed in the same room that Brian occupied when he confronted Edison on the beach.

As a practicing New York attorney, how would you compare the New York judicial system to courts in other parts of the country?

THE DEVICE TRIAL is a sequel to your debut novel, The Complaint. What have you learned that makes your second book better?

I think the second book has a more focused and straight-forward plot presentation. When I started writing The Complaint, I didn’t have a detailed outline. As a result, the early pages tended to ramble a bit. I avoided that pitfall in THE DEVICE TRIAL and attempted to present the main story lines from the onset. I also worked on the ending to make it more satisfying and complete, while still leaving open a couple of dangling events for continuation in the third book. My 96 year-old father told me he didn’t like the abrupt ending of The Complaint, so hopefully I dodged that criticism in THE DEVICE TRIAL.

What authors or books have influenced your writing of THE DEVICE TRIAL the most?

To Kill A Mockingbird influenced the way I approach courtroom drama. The Firm by John Grisham taught how an author’s description of “an atmosphere of paranoia” will keep readers glued to the story. Just as the crime family in The Firm was in constant pursuit of the good-guy lawyer, I created a rogue corporation that it is always seeking to defeat and harm Brian and those he cherishes.

I also admire the engaging dialogue among characters in Lonesome Dove, especially Larry McMurtry’s constant banter between Augustus and W.F. Call. It taught me how engrossing conversations between familiar characters will command a reader’s attention, especially when mixed with a little humor. 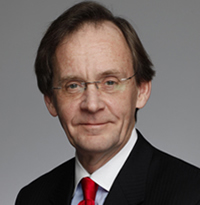 Tom Breen has practiced law over twenty five years and is currently a partner in a law firm in downtown New York. Tom’s litigation experience has enabled him to realistically create courtroom and deposition scenes with tense dialogue and interesting characters that simulates actual courtroom dynamics. He lives with his wife on Long Island and their two daughters are practicing attorneys living in New York City.