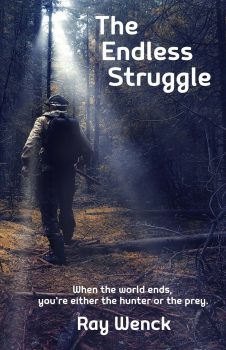 With the mysterious event that wiped out the majority of mankind now five months past, and winter fast approaching, Bobby, Becca and Myron hunt for game. Although life is not easy, it has at least settled into a somewhat normal routine. That is until they discover a band of hunters stalking human prey.

For Mel, Caryn and Tara, the end of the world has been a constant struggle to survive. The new world has become chaotic and and dangerous. Those with the power make the rules. Life has little value except in the depths of depravity in the minds of those who own you. Now, pursued by armed men, the three women are forced to flee or be sold into slavery.

Bobby, Becca and Myron rescue the women, but are then hunted themselves. With time running out and the hunters closing in around them, the small band must find a place to make a stand, as much for themselves and humankind, as for humanity itself.

RANDOM SURVIVAL 3 is available from Amazon.

Ray Wenck taught elementary school for 35 years. He was also the chef/owner of DeSimone’s Italian restaurant for more than 25 years. After retiring he became a lead cook for Hollywood casinos and the kitchen manager for the Toledo Mud Hens. Now he spends most of his time writing and doing book tours, meeting old and new fans and friends around the country.

Ray is the author of nine novels including the highly acclaimed, Amazon Top 20 post-apocalyptic series, Random Survival, the paranormal thriller, Ghost of a Chance and the mystery/suspense Danny Roth series. A list of his other novels can be viewed at raywenck.com.

His hobbies include reading, hiking, cooking, baseball and playing the harmonica.

Ray lives in the Toledo area where most of his stories are based.