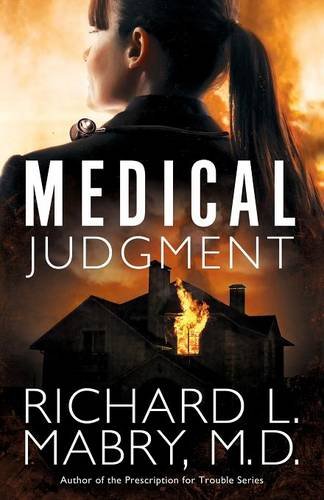 Someone is after Dr. Sarah Gordon. They’ve stalked her, set a fire at her home—and she has no idea what will come next. Her late husband’s best friend and a recovering alcoholic detective are trying to solve the mystery before it’s too late, but both appear to be vying for her affection as well. Who is doing this? Why are they after her? Will it mean her death? And whom can she trust?

You’ll have to read MEDICAL JUDGEMENT to find out.

In an interview with The Big Thrill, Dr. Richard L. Mabry answers a few questions about the inspiration behind his 10th medical suspense, and what readers can expect next.

Where did you get the inspiration for this story? Is there a real Dr. Gordon?

There was no one incident that made me think, “I should write about that.” I started with some of my feelings after the death of my first wife left me “single again,” and began to imagine how a younger doctor in this situation would react if her life was threatened. The story grew from that.

As for Dr. Gordon, there was no specific inspiration for her character. Over my three and a half decades of medical practice, I was privileged to know and work with numerous female physicians. I suppose I simply took characteristics from several of them to create her.

Why and how did you begin writing novels?

During my 36 years in medicine, I wrote or edited eight medical textbooks and over 100 published papers for medical journals, but never considered any other type of writing until my wife of 40 years died suddenly. I used the journaling from that episode as the basis for a non-fiction book, The Tender Scar: Life After The Death of a Spouse. During the process of learning how to craft that book, I became interested in writing fiction. Like golf, bowling, or any other activity, once I took it up, I decided I not only wanted to try writing, but to become proficient at it. Since MEDICAL JUDGMENT will be my 10th published novel of medical suspense, perhaps I’ve succeeded.

You’ve served as a medical officer in the Air Force. What are some memories you would like to share from your time there?

I was in the U.S. Air Force for almost three years, stationed in the Azores, a Portuguese possession.          Although we were on an isolated base, my wife and young child were able to join me after three months, and we had some good times there, including a couple of vacations in Europe.

I suppose one of my lasting memories is the time my hospital commander and I performed a relatively simple operation that saved the life of an Azorean child, something that was written up in the service newspaper, Stars and Stripes, and for which I was awarded an Air Force commendation medal.

What is the single most important thing you have learned during the writing process of crafting a novel?

The writer is rare who can produce a good novel in the first draft. And the resulting novel isn’t the product of just the author. It takes several revisions and input from a number of people before a writer can turn out a novel people enjoy reading.

A word of advice for new writers?

Spend the time and effort to learn the craft. Realize that sometimes it takes writing two, three, even four novels before you truly find your “voice” and are able to turn out a good novel. Be persistent. Don’t compare yourself and your work to what you see around you—be yourself and strive to improve with each book. And, although we wish it were otherwise, it will be up to you to take the lead in letting others know about your books.

What are your favorite pastimes?

A friend and I try to play golf once a week, weather permitting. I’ve had a life-long love affair with baseball (as a player, coach, and fan), and during the baseball season, my wife and I enjoy watching Texas Rangers baseball. And, of course, I like to read.

What is your next book going to be about?

Since the formal contract isn’t yet signed, I can’t reveal the publisher, but I can assure my readers that my novels will have a home. Here’s a bit about Cardiac Event:

Cardiologist Dr. Kirk Martin continually crosses swords with Dr. Cliff Hamilton, so he is surprised when Hamilton asks him to perform his coronary angiogram after a heart attack.

When Hamilton dies in the hospital, Martin is initially one of the suspects. Then, when another doctor is shot, Martin changes from a suspect to a potential victim.

Nurse Janet Rush tries to shore up Martin’s dedication to his profession and his faltering faith, while he seeks to protect himself and discover the person who’s behind the murders.

Dr. Richard Mabry is a retired physician, now writing “medical suspense with heart.” His previous novels have garnered critical acclaim and been recognized by programs including the ACFW’s Carol Award, the Romantic Times’ Inspirational Book of the Year, the Inspirational Readers Choice, and the Selah Award. He is a proud member of the ACFW, the International Thriller Writers, and the FHL chapter of the RWA. Medical Judgment is his tenth published novel.