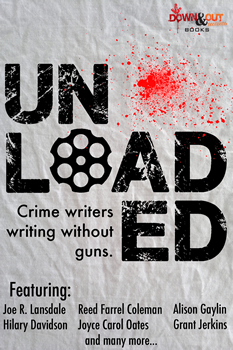 Most people would associate crime fiction with guns—often a weapon of choice for bad guys, and good guys. Well, they may be proven wrong by the new anthology, UNLOADED.

For the first time, more than two dozen crime and mystery authors have joined together to use the strongest weapon at their disposal—words—in a call for reasonable gun control in the United States. In this collection you get all the thrills and excitement you come to expect from a great crime story, but without any guns.

The writers are from both sides of the political aisle and many of the authors are gun owners themselves. But everyone felt it was time to speak out. Featuring the talents of Joe R. Lansdale, Hilary Davidson, Reed Farrel Coleman, Alison Gaylin, Grant Jerkins, Joyce Carol Oates, Tim O’Mara, Rob Hart, Kelli Stanley, Joe Clifford and many more.

The Big Thrill had the opportunity to interview the author who put on his editor hat for the anthology,  Eric Beetner.

How did you get the idea for UNLOADED?

Way back after the Sandy Hook Elementary school shooting I had the idea, but I figured it wouldn’t work. I know how small the gesture is on an issue this big, but then when shooting after shooting happened I just felt I couldn’t sit silently by any more. Tweeting anger about it only went so far. Plus, I started to notice several of my author friends had similar feelings about guns as I did. I was curious to know if they also shared the guilt I felt about using guns in my writing while personally advocating for more gun control. When I started to approach writers about the idea I got enthusiastic responses, even from those authors too busy to contribute a story. I think people had felt, as I did, that we needed to band together to say something, no matter how small. We don’t expect to move legislation with this book, but if we can add our voice and our opinion to the conversation about guns in America and do so without the vitriol or animosity that usually comes with the conversation, then we will have accomplished what we set out to do.

Can you tell us a bit about the selection process?

I gave the authors a lot of leeway as far as what type of story they wanted to write. The only stipulation was that it not contain any guns, either on or off stage. I wanted writers to feel free aside from that one restriction. When I started getting in stories they were as eclectic as I expected, and I could tell some writers really embraced telling a different kind of story. It is a varied collection with a little something in there for everyone, I feel.

Not everyone I approached was able to contribute either because of schedule or a slim one or two just didn’t feel strongly enough about the subject matter. I was going after writers I knew had a predisposition to the politics involved due to my knowledge of their social media presence. But even the ones who could not do it now have all expressed interest in a second volume if that happens, so I’m well on my way to a great Volume 2 should we do well with this one.

With so many different authors, and their unique voices, was it a challenge for you to edit the collection?

The very first story I got in, Grant Jerkins’s The Starry Night, was one of the most unique narratives. I knew I was both in good shape because the story was so good, and in a challenging position because I admire Grant’s writing so much I didn’t want to edit him at all. He took my one overall note and accepted it and the story really shines. From then on it was just one gem after another in my inbox. I trimmed some length from a few to try to achieve balance in the overall length of the stories, and I even asked for more of one story. In the end I really wanted each author’s voice to come through since this was them putting their name to a political stand. I wanted each writer to feel that his or her unique voice was being heard in this group statement we are making.

As a writer doing editing it is very tempting to tweak prose so it matches what you might do, but that wasn’t my job. I certainly didn’t want two dozen stories to all end up sounding like me. I think each author’s voice rings through.

I will say, these are authors, so wrangling all the stories in a timely fashion is enough to make anyone go prematurely gray. Some writers came on to the project late, some were delayed by other deadlines in their writing, some I felt bad for because they turned in their story and then had to wait for me to get all the other deals made and for a while it must have seemed like this collection would never come out. I thank them all for their patience in this long process.

We obviously won´t ask which one is your favorite, but was there a special ruling for the stories´ order of appearance?

With something so eclectic I wanted to space out the stories of a similar style so each new tale you turn to is something very different. I’ll admit to front loading with some of the bigger names and authors I admire greatly, like Joe R. Lansdale. His story and Joyce Carol Oates are the only reprints in the collection, but I was glad to have them because I admire them as writers so much. Beyond that, I just put in a story I felt worked well as a good left turn after the story the reader had just completed. Collections tend to be read over long periods of time so I wanted it to be able to get picked up at any point and you almost feel like you’re coming to it completely fresh, while at the same time for the reader who is going to power through it, to give them a varied reading experience.

As per the cover, the proceedings will go to www.ceasefireusa.org, can you tell us a bit about this organization?

It was important to me to donate all profits from a book like this. Each author donated their story. Nobody got paid, and everyone was eager to do it, which I am grateful for. I wanted to find an organization with a similar mindset and not someone whose only concern was to bash and trash talk the other side of the argument. With States United To Prevent Gun Violence, we found a great partner. They are a smart, grassroots organization interested in tackling the issue one state at a time rather than beating their heads against the national wall. I was really inspired by a video they made where they set up a fake gun shop in New York City and added some information to the guns they were “selling” which included what the gun had previously been used for—including the death of small children, mass shootings, accidental deaths. The tone of the video wasn’t hyperbolic, it wasn’t using scare tactics and I admired that. I found them to be a good fit for our project and when I pitched it to them, they were enthusiastically on board. I certainly hope we can raise a little money for them.

Any promotion engagements from the authors for this work?

We have both a West Coast and an East Coast book launch event. With so many authors in the New York area they have a great lineup on May 4th at the Mysterious Bookshop in Manhattan that includes Angel Colon, Rob Hart, Reed Farrel Coleman, Thomas Pluck, Hilary Davidson, Alison Gaylin, and Tim O’Mara. And then we have a West Coast launch at Pegasus Books in Berkeley, CA. on Friday May 6 featuring contributing authors Joe Clifford, Kelli Stanley, Tom Pitts, Holly West, S.W. Lauden, and myself.   We’ll be having an event at this year’s Bouchercon in New Orleans as well.

How are people responding so far?

I really think it’s important to note that we all know this is a small gesture. The issue is big and complicated and emotional for many people. Our hope is to add a rational voice to the conversation, to raise the issue without descending into an argument. I’m happy to say the correspondence I’ve had with people who are on the other side of this issue has so far been thoughtful and respectful. I hope it continues, even when I know this book will push some buttons. Any time you take a stand on a divisive issue like this, it puts you at risk of being ridiculed or taken to task by people with an agenda. I admire the authors for standing tall and the publisher, Down & Out Books, for taking a chance on us. Contributors include gun owners and non-owners, Democrats and Republicans. If we can have a sensible conversation that mirrors the majority of Americans who agree there should be more limits on gun ownership and gun access in this country, then it gives me faith that the entire country will one day come around. 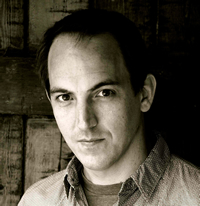 Eric Beetner is the author of Rumrunners, The Devil Doesn’t Want Me, Dig Two Graves, White Hot Pistol, The Year I Died Seven Times, Stripper Pole At The End Of The World and the story collection A Bouquet Of Bullets. He is co-author (with JB Kohl) of the novels One Too Many Blows To The Head, Borrowed Trouble and Over Their Heads. He co-wrote The Backlist with author Frank Zafiro. He has also written two novellas in the popular Fightcard series, Split Decision and A Mouth Full Of Blood. He lives in Los Angeles where he co-hosts the Noir At The Bar reading series.