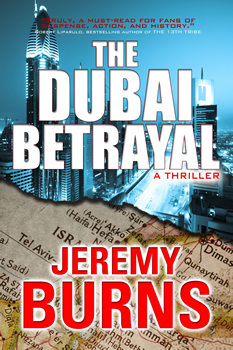 Jeremy Burns travels…constantly, but right now he’s settling into his new office and celebrating the release of THE DUBAI BETRAYAL, a geopolitical spy thriller featuring Wayne Wilkins, a fan favorite from Burns’s acclaimed first novel, From the Ashes. As if providing the soundtrack to this fierce new book—in which Wilkins leads an elite group of black ops soldiers into Dubai to rescue the U.S. Ambassador to Israel—the adrenaline-pumping Celldweller comes up on Burns’s playlist while he sifts through photos and other mementos of his travels.

“I’ve been moving around a lot,” he says, which is an understatement considering that he, his wife, and dogs have been on a year-long sojourn exploring the country after several worldwide adventures on his own. Imagine the rakish Burns in expedition wear while spelunking in Lebanon or chasing monkeys through a jungle temple in Rajasthan. Or donning some city chic threads on the backstreets of Brussels or the forgotten churches of Rome or sporting some pretty cool aviators as he soaks up the Middle Eastern sun during his two years in Dubai, which is where he was living when he finished writing From the Ashes, the beginning of his American-based Jonathan Rickner series.

“Dubai was too fascinating a place not to explore in a thriller,” Burns says. “Everything there is superlative, designed to be bigger and better than anything else in the world.” In fact, every scene in THE DUBAI BETRAYAL is a real place and several of the locales are tied to specific events Burns experienced during his time in the country.  “I celebrated New Year’s 2009 at a villa on the Palm Jumeirah. My apartment was in the Hor Al Anz neighborhood. I watched the grand opening of the Burj Khalifa and got to go up in it within days of its opening. And I spent many a weekend exploring the vast halls of the Dubai Mall. These and many more unique settings provided a fascinating backdrop.”

Switching from the Manhattan locale in From the Ashes to an exotic locale for the second novel could have been a risky move, but Burns believes readers will be excited.  “Both are fascinating cities, but despite its newness as a major metropolis, Dubai has a wealth (no pun intended) of iconic buildings and superlative architecture, populated by a truly cosmopolitan population which, at times, clashes with the fact that it is in an Islamic nation. In fact, it is this very undercurrent of tension between tradition and progress, between the Middle East and the West that serves as a key motive behind one of the antagonist’s actions. The complex geopolitical makeup, massive scope, and hidden vice of Dubai provide an excellent playground for Wayne and his new teammates to face off against their powerful foes.”

I asked how Wayne ended up with his own book. “A mentor and friend of mine named Wayne Wilkins asked to be a character in my then-nascent story [From the Ashes]. Ultimately, he became a fan favorite, dynamic and conflicted with a strong moral compass and a wry sense of humor. I think Wayne saw some similar characteristics in Jon [Rickner], reminding him of his own youth and how things might have turned out had Wayne’s parents not died on 9/11 and had he not used his military service to satiate his desire for revenge.  The threats of THE DUBAI BETRAYAL called for Wayne’s own unique skillset. While Jon’s adventures are more akin to the works of Dan Brown or Steve Berry, Wayne’s first solo outing is more in the Brad Thor/Mark Greaney/Joel C. Rosenberg vein.”

That’s exactly what Mark Greaney (#1 New York Times bestselling author of Back Blast and Tom Clancy Full Force and Effect) thought: “THE DUBAI BETRAYAL is an intense and authentic thriller that bristles with both hard-edged action and intelligent international intrigue. Filled with believable characters in well-drawn locales, and a high stakes but utterly convincing plot, THE DUBAI BETRAYAL will leave fans of Daniel Silva and Brad Thor breathless for more.”

I asked how it feels to be a thriller writer that other thriller writers want to read.  “It feels tremendous knowing that the authors who I admire and who have inspired me now feel the same way about my writing.”

And, does that mean extra pressure for Burns to deliver? “I think there is extra pressure, not just from other writers but also from my fans, who are not quiet about how much they loved my first book. I definitely don’t want to let them down. Ultimately, though, I mainly want to make sure the story I’m telling is the best one I can tell at this stage of my career (which, ideally, will be improving with each successive book).”

Some early reviewers on Goodreads are already happy with Burns’s latest venture, including one who mentions that the author’s “grasp of the historic and present-day state of affairs in the Arabian Peninsula raises the book to another level…while never letting up on the accelerator.”

Since that last bit also sums up Burns’s travel lifestyle, I asked about the most frightening thing that has happened to him while researching. “Climbing Mount Mansfield, the tallest mountain in Vermont. It was late autumn, and my wife and I were ill-prepared for the ascent, both in our climbing gear and in our time planning. We made it to the top, but the cold of night set in as the sun began to dip behind the mountain. We had to make a mad dash across a treacherous series of boulders, optimistically called the Cliff Trail, hopping across twenty-feet-deep crevasses while already beleaguered from the journey up. We made it to the last gondola just in time to get back down the mountain before nightfall stranded us up there without flashlights, food, shelter, or warm clothes. I realized that I had to use that experience, so I did in The Flagler Hunt, the forthcoming prequel to From the Ashes, where a younger Jonathan Rickner and his brother Michael match wits with a notorious treasure hunter to unravel a centuries-old puzzle in the heart of America’s oldest city.”

To watch the progress of Burns’s upcoming projects and delve further into his travels, visit AuthorJeremyBurns.com, JeremyBurnsBooks on Facebook, @authorjburns on Twitter, and @AuthorJeremyBurns on Instagram. Oh, and you might just get some tips on having your own adventures while you’re there. 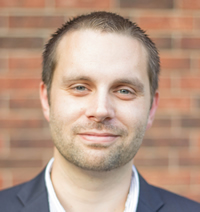 Jeremy Burns is the author of THE DUBAI BETRAYAL and the two-time Amazon category #1 bestseller FROM THE ASHES. A world traveler who lived and worked in Dubai for two years, he uses much of his own adventures and discoveries as fodder for his books. When not exploring a new corner of the globe, he lives in Florida with his wife and two dogs.