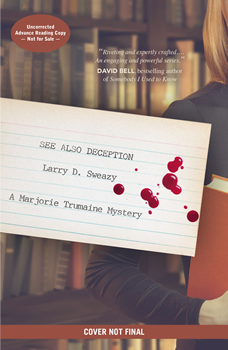 I met Larry Sweazy at the Southern Kentucky Book Fair, where we sat at adjoining tables and shared anecdotes while hoping to attract new readers. I left with a copy of Rattlesnake Ridge, his first western mystery featuring Texas Ranger Josiah Wolfe. It reminded me of my favorite Louis L’Amour novels, and I was hooked.

Sweazy’s latest project, SEE ALSO DECEPTION is a beautifully written and authentically researched mystery with a complex heroine. The sole caregiver for her severely disabled husband, Marjorie is a believable combination of strength and vulnerability, loneliness and stoicism. She’s someone I’d definitely like to see more of.

I asked Larry to talk with us about his new book and his writing process, and he generously agreed.

Thanks for joining us, Larry. Can you tell us a bit about your journey as a writer?

I fell in love with reading and stories early in my life. I had the requisite difficult childhood and I escaped into books whenever I could. After discovering theater in high school, I flirted with becoming an actor, but after reading so many great books, it occurred to me one day that I could write, I could tell stories for a living. From there, my journey was long and curvy. I wrote a lot, read a lot, worked a lot of different jobs, gathered a ton of rejection slips, and then managed to sell my first novel (the seventh one I had written) when I was forty-seven.

Your books are pretty research-intensive. What’s the most frightening thing that’s happened to you while researching a work-in-progress?

The difficult thing about research is knowing when to stop. I think you have to be completely obsessed with an idea for it to be worthwhile. And that’s the hard part for me. Becoming so obsessed about something that I lose sight of the book I’m writing. I wish I could give you an example of some harrowing adventure that went awry, but most of the time, I end being lost in a book instead hung out on a ledge somewhere.

What led you from your western mysteries featuring Texas Ranger Josiah Wolfe to a novel set in the sixties about a farm wife on the western plains?

I’ve been a professional back-of-the-book indexer for the last eighteen years, so I started indexing long before I sold my first Josiah Wolfe novel. One of the paths an indexer took in the past to educate themselves was to take a correspondence course administered by the USDA (United States Department of Agriculture). The course was intended to give farmers’ wives supplemental income over the winter. I thought from the very moment that I discovered that little known fact, that a woman on an isolated farm who was an indexer would make a great amateur sleuth. It took me a little while to get from Josiah to Marjorie, but I was lucky enough to find a great publisher, Seventh Street Books, who shared my vision and saw the possibilities in Marjorie that I did.

Apparently the reviewers do too. Marjorie has been described as the “the ideal amateur sleuth—steely, steady, and in tune with the subtle rhythms of small-town life.” What challenges did you face when writing about a protagonist of the opposite sex, and what makes her such an ideal amateur detective?

I really couldn’t figure out how to tell the indexing amateur sleuth stories without Marjorie as the protagonist. I knew it was a risk, but the story demanded it. Simple as that. I had no choice if I was going to stay true to the vision of the story that I originally had. So, I had to try to and write it at the very least. I wasn’t going to allow any inside or outside voices determine my artistic path by telling me that I couldn’t write Marjorie’s story just because I was a man. I wrote a short story and it was ultimately nominated for a Derringer Award. I think that validation really urged me on to lengthen the story into a novel, and then a series.

Writing the opposite sex is a huge challenge and one I take very seriously. I have asked my wife some very odd questions that have led to some interesting and insightful conversations that wouldn’t have happened without the creation of Marjorie. Marjorie’s curious mind is her greatest asset, but she is also a great multitasker and has a strict work ethic. All of the important women in my life could manage six things or more at once. Work. Raise a Family. Be a wife. The list goes on. Add in grit, determination, a fierce sense of independence, and I think the recipe for an amateur sleuth is pretty much set.

I’m a linear writer. I usually write a novel from start to finish within a time frame of six months, and I only outline a little bit. I like to have a vague idea of where I’m going, and the end is always different than I imagined it to be when I started out. I like the adventure of not knowing what’s going to happen, just like the reader…

What do you wish you’d known when you were starting out?

If I had understood how precarious and subject to change the publishing industry is, I might have chosen a different profession. But I’m a storyteller. I really didn’t know how deeply ingrained that need was in my soul until I really started writing seriously.

Any advice to give aspiring writers?

The usual, read a lot, write a lot, don’t let anyone or any trend tell you what to write. Embrace failure and rejection. It is far more valuable to your success than you can imagine. Never give up. The world needs to hear your stories. 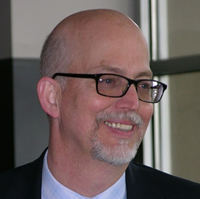 Larry D. Sweazy is the author of See Also Murder, A Thousand Falling Crows, Escape from Hangtown, Vengeance at Sundown, The Gila Wars, The Coyote Tracker, The Devil’s Bones, The Cougar’s Prey, The Badger’s Revenge, The Scorpion Trail, and The Rattlesnake Season. He won the WWA Spur award for Best Short Fiction in 2005 and for Best Paperback Original in 2013, and the 2011 and 2012 Will Rogers Medallion Award for Western Fiction for the Josiah Wolfe series. He was nominated for a Derringer award in 2007, and was a finalist in the Best Books of Indiana literary competition in 2010, and won in 2011 for The Scorpion Trail. He has published over sixty nonfiction articles and short stories, which have appeared in Ellery Queen’s Mystery Magazine; The Adventure of the Missing Detective: And 25 of the Year’s Finest Crime and Mystery Stories!; Boys’ Life; Hardboiled; Amazon Shorts, and several other publications and anthologies. He is member of ITW (International Thriller Writers), WWA (Western Writers of America), and WF (Western Fictioneers).