Harnessing Dangerous Technology for a Thriller 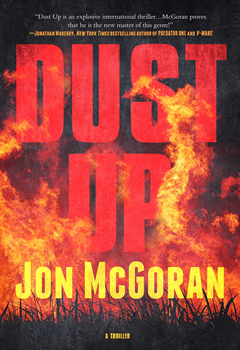 In one of Casino Royale’s most memorable quotes, Vesper Lynd tells Bond: There are dinner jackets and dinner jackets, this is the latter. The same principle applies to book series. There are book series that cite the previous entries almost on every page, and then there are book series—like Jon McGoran’s DUST UP—that are a joy to read and that stand on their own without depending on the early books. DUST UP is the third entry in the Doyle Carrick series and this time trouble literally comes knocking to his door.

Ron Hartwell, a complete stranger, is dying on Doyle’s doorstep. A halfhearted investigation labels the murder a domestic dispute, with Miriam, Ron’s widow, the sole suspect. When Doyle discovers the Hartwells both worked for a big biotech company, he suspects something else is going on, but it’s not his case. Miriam tracks him down and tells him her story, landing them in Haiti.  Working with Miriam, he must untangle a web of deceit and unconscionable corporate greed in order to stop an epidemic of even greater evil before it is released on the world.

The Big Thrill had the opportunity to catch up with McGoran about his new book.

What can we expect from Doyle Carrick on this new adventure?

It’s definitely the same Doyle Carrick, but the action unfolds on a bigger stage, the issues he is confronting are more expansive, and the events of the first two books, and this one, are weighing on him. His awareness of larger forces around him has grown, and his world view is changing. He’s seeing things on a bigger scale and losing what little patience he has with the smaller scale BS he has to deal with on a day to day basis.

What is Doyle up against this time?

There are several antagonists, large and small, including some returning characters and several new ones. One thing they have in common to varying degrees is a willingness to accept terrible collateral damage in order to further their personal, professional, political, or economic goals. I find in many ways the worst villainy lies not in the ultimate goals of bad actors, but in the incidental harm they are willing to inflict in order to achieve their goals.

Was there a lot of research involved?

I always do a lot of research on these books, but this one required more than usual. There was a lot of scientific research, which is always fascinating. My pal Chris Holm was massively helpful — as it turns out, in addition to writing one of last year’s best thrillers (The Killing Kind), he also has a background in molecular biology. I interviewed many other experts as well: agronomists, geneticists, activists, allergists. But the book takes place in Haiti, and the biggest piece of research was traveling to Haiti and staying with a group called Papaye Peasant Movement, seeing the sustainable agriculture and land reform work they are doing and meeting with their founder, Chavannes Jean-Baptiste, who shortly after our visit became a candidate for president. We were in Haiti in the middle of a political crisis, with the government on the brink of collapse and huge, sometimes violent protests demanding long-delayed elections. It was a little unsettling at the time, but it really helped me understand Haiti, as a country and as a setting for the book.

What got you first interested in bio-tech and when did you see its potential for a novel?

It’s a topic I’ve been following for years, and right off the bat, several things struck me about it. I thought it was a powerful and potentially beneficial but potentially very dangerous technology. I was alarmed at how quietly it had taken over the majority of our commodity food supply with what still seems to me like wildly inadequate long-term safety or epidemiological studies. And I was struck by the fact that, at the time, so few people knew about it. I definitely leave open the possibility that GMOs could end up being a net positive in many ways, but the way the technology has been introduced, the way companies have tried to control and limit and inhibit research and block labeling, I don’t think it’s doing anybody any favors.

Pretty early on, I saw the potential for a series of thrillers. The more I delved into it, the more ideas I got, both about the technology itself, which is fascinating, and how it is being wielded, which is disturbing. Even before I had written a word, there was this backstory —shadowy multinational corporations pushing untested new life forms into the food supply of an unsuspecting public. Boom! There’s a thriller right there. And there are innumerable jumping off points to go in different directions from there.

What is the most frightening thing that has happened to you while researching a work-in-progress?

There were a couple of moments in Haiti that were a little unsettling, but that may have had more to do with me having the type of mind that looks for those scenarios rather than any actual danger. While there, we were warned very specifically not to be out after dark, even when we were out in the countryside. One day on our way back to the Papaye Peasant Movement compound, where we were staying, a small group of us decided to stop at a roadside bar for a quick beer (or two) and walk the mile or two home. The hike was beautiful, but with darkness falling as we approached the compound, voodoo drums began to thrum nearby. It was amazing, but a little disconcerting.

Then, when we entered the compound, I noticed a strange glow in the sky. A nearby hillside was on fire — probably to clear it for replanting, but no one knew for sure. It left me a little jumpy, and late that same night I was awakened by a roar of helicopters hovering low right overhead. We’re in the middle of a serious political crisis, staying in the compound of a vocal critic of a regime that was already  using violence against its opponents. For a moment I wondered if the regime was taking action against our hosts, and if the violence and danger I was writing about were about to become real. But a few minutes later, the helicopters roared off into the distance. That was that, but it took me a little while to get back to sleep.

A couple of days later, we drove back to Port au Prince to fly home one day before the parliament was set to dissolve, making the president a de facto dictator. The airport was surrounded by heavily armed police and the situation was very tense. Our flight was delayed several times, and when we finally got home, we found out that while we had been at the airport, protests less than a mile away had turned violent and one man was killed.

I’ll be doing 15 or 20 signings, readings and panels, mostly around Philadelphia, but also in Pittsburgh and ranging from upstate New York to the D.C. area. I’ll be doing a mini blog tour and some social media ads. We’ve put Drift, the first book in the series, on ebook special, $2.99 until April 4, and Tor/Forge is releasing the Carrick novella, Down to Zero, on April 5, so that is part of the mix as well. One of my favorite parts of promoting my books is the launch party. It’s become a kind of a tradition, these big splashy launch parties. We launched Drift at Philadelphia’s Academy of Natural Sciences and Deadout at the University of Pennsylvania’s spectacular Morris Arboretum. This time, we’re launching from the roof of Philadelphia’s landmark central library. They have a Skyline Room and Roof Deck, and there will be live jazz, food, and — particularly exciting — the St. Benjamin Brewing Company is not only supplying the beer, but they are brewing a special beer just for the occasion. It’s going to be a great event.

This year you also had a short story published about the X-Files. How did that project come about?

I had done a number of stories in the past for IDW, the comic book company and publisher, including a short story and a novelette in No Man’s Land, an anthology based on their Zombies Vs. Robots comics (That was insane amounts of fun). My friend Jonathan Maberry had initially connected me with IDW, and when he contacted me and asked me if I wanted to write a story for the X-Files anthologies he was editing, I jumped at the chance. It was a hell of a lot of fun, and I’m really happy with how the story came out, and the anthology.

What are you currently working on, and is it Carrick No. 4?

I’ve actually been working on a number of projects, most of which I can’t talk about. I just wrote a Doyle Carrick novella, called Down to Zero, but at the moment I’m taking a break from Doyle to work on a few other projects — a couple of standalone thrillers and a science fiction novel — and to write some short stories, which has been a lot of fun. I currently have a crime story, a horror story, and a couple of science fiction stories out on submission, which I personally think is oddly hilarious. It would be great to pull off a trifecta or a hat trick or a triple play — there should be a term for publishing in three genres at once. (Hopefully, it’s not “career suicide.”)

We certainly hope not, or else the casualties of authors will be plenty. Thank you, Mr. McGoran for your time, and best of luck with Dust Up. 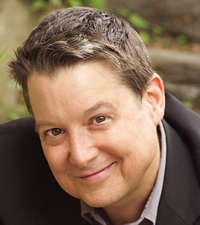 Jon McGoran is the author of six novels, including the biotech thrillers Drift, Deadout, and their upcoming sequel, Dust Up (April 2016, Tor/Forge Books), and the forensic thrillers Body Trace, Blood Poison and Freezer Burn, written as D.H. Dublin (Penguin Books). His short fiction includes the novella “After Effects,” from Amazon StoryFront; Bad Debt, which received an honorable mention in Best American Mystery Stories 2014; and stories in a variety of anthologies, including IDWs upcoming X-Files anthology, The Truth Is Out There. He is a founding member of the Philadelphia Liars Club, a group of published authors dedicated to writers helping writers.