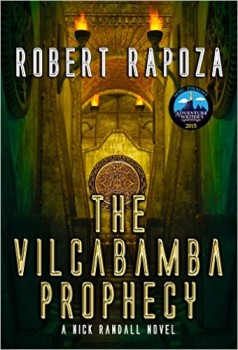 DR. NICK RANDALL is an archeologist on the fringes of the scientific community who believes that mankind isn’t alone in the universe … or on this planet. When a mysterious benefactor funds his research, Randall departs on an expedition to find the lost city of Vilcabamba. Hidden deep in the Amazon, Randall believes this legendary city holds proof that his controversial theory is true. Upon arriving at the ruins, he mysteriously disappears.

Randall’s beautiful daughter SAMANTHA learns of her father’s disappearance from his mentor DR. FRANCISCO ANDRADE who calls Sam and pleads for her help. An accomplished archeologist herself, Sam must decide if she will set aside her career and search for the man she blames for her mother’s death. Reluctantly, she agrees and flies to Peru to search for her father.

But someone else is looking for her father as well. Francis Dumond, a shadowy man with a dark past and unlimited resources, will stop at nothing to find Vilcabamba and use its alien technology to control the world. It’s a race against time to see if Sam can find her father, prove his theories and stop Dumond before a stratovolcano destroys Vilcabamba and all of them as well.

THE VILCABAMBA PROPHECY is available from Amazon.

The Visitors had me on the edge of my seat! This is a very action packed read; it’s full of plot twist and turns that keep you guessing the outcome. The writer doesn’t make you feel that this could be a HEA ending. The lead characters are in peril and the reader has no idea if any of them will make it out alive.

Mr. Rapoza’s writing style is clear and concise, yet descriptive enough to put the reader right in the middle of the action. He brings out the reader emotions by making you love the characters. You want the good guys to win, but you’re never sure that they will.

While reading the book, I was excited, sad, laughed, and got pretty upset and angry at a couple of spots. THAT is writing at its finest.

Congratulations to Mr. Rapoza for writing an excellent story. One I would recommend to anyone that enjoys thrills, adventure and “edge of your seat” reading. I am looking forward to reading more books from this very talented author.

This is a roller coaster ride of a read! Exciting, thrilling, and a definite page turner. I loved it and you will too! – Wil S

Born and raised in Southern California, Robert Rapoza began writing his first novel in 2012. The result of these early efforts is his first story THE VILCABAMBA PROPHECY, a novel about Nick Randall, an archeologist on the fringes of the scientific community. Since that time, he has written a second thriller OPERATION ICE HAMMER, which continues to follow Nick Randall’s exploits. When not writing full length fiction novels, he also enjoys writing short fiction following the characters from his novels along with other original concepts. He is a member of the Southern California Writers Association and the International Thriller Writers Association and enjoys interacting with other local writers. Bob is also actively involved with the online writing critique group ‘YouWriteOn’ where he receives and provides feedback with other authors.

The ideas for his stories are drawn from his interest in archeology and science and his love of adventure stories. Bob has always been drawn to these topics and is fascinated by the technology utilized by ancient civilizations. This interest has provided fertile ground for entertaining stories. History is rich with mysteries waiting to be solved and Bob enjoys asking questions about these mysteries and offering ideas about what they might mean.

Bob is represented by Mark Gottlieb of the Trident Media Group and THE VILCABAMBA PROPHECY will be released on 4/10/16 by Ravenswood Publishing.