In THE GOOD TRAITOR, Ryan Quinn brings back Kera Mersal, the CIA analyst-turned-operative who uncovers a scandal within the agency and is then accused of treason. Her mission is now to unfold a geopolitical conspiracy while trying to clear her name after the events of the previous novel. Described by the author as a combination of Jason Bourne, Edward Snowden and Carrie Mathison from the TV series Homeland, Kera’s first appearance was in End of Secrets, a finalist for the 2013 International Book Awards.

Born in Alaska, Quinn worked in the publishing business in Manhattan for five years, during which he wrote The Fall, a college coming-of-age story that he published at his own expenses. The sales were so good he was soon contacted by an editor at Lake Union, an imprint of Amazon Publishing, who was interested in publishing the novel.

Quinn’s first literary attempts remain in his drawer. “I think first novels are incredibly valuable to writers, and best kept away from readers,” says the author. “It takes a full novel or two to begin to learn your own strengths and weaknesses and how to deploy them over a four-hundred-page project.”

The world of international espionage couldn’t be further from Quinn’s daily life, so half of his work is dedicated to research. He believes this is the best period in history for writers who want to tackle subjects that are away from their own personal reality, since information is widely available.

“If writers wrote only about events they had directly experienced in their own lives, most books would be excruciatingly tedious,” he says. “To create a richly imagined world, a writer must write about plenty of things he’s only imagined.  Bridging the gap between what we’re fascinated by and what we have direct knowledge of is what fiction is all about.”

Grounding his novels in reality is crucial, but more important to Quinn are the characters and the story. Thankfully, as he found out during the research project for End of Secrets and THE GOOD TRAITOR, there’s no need to go into science fiction territory to make his writing technically impressive. “I was repeatedly surprised to learn what our intelligence agencies and data-mining companies are already capable of,” he says. “It’s both fascinating and terrifying. The stakes for our privacy and security are already alarmingly high; sticking closely to reality when depicting that in fiction sharpens that very real, built-in tension.”

And it is for the sake of realism and character development that Quinn’s novels feature what some readers have called “gratuitous profanity and sexuality”. But since these are normal aspects of the life of real human beings, he sees no point in toning them down in his characters. “Almost every single character—just like every single person in real life—has some significant relationship with sex and sexuality,” Quinn states. “And if they don’t, then that is itself a very unique and revealing fact.”

This “excess” doesn’t seem to bother his editors the least bit. Quinn’s novels are now being published by Thomas & Mercer, the thriller imprint of Amazon Publishing. He now lives in Los Angeles, where he writes and trains for marathons. Quinn is getting lots of praise from the fans of the genre for THE GOOD TRAITOR. All those hours of research seem to have paid off. “My favorite reviews are where a reader says the book made them think, where they say they’ll never be able to view privacy or the media or the intelligence community in the same way again.” 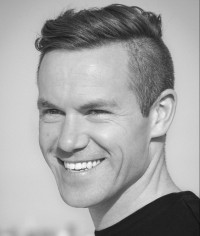 A native of Alaska, Ryan Quinn was an NCAA champion and an all-American athlete in skiing while at the University of Utah. He worked for five years in New York’s book-publishing industry before moving to Los Angeles, where he writes and trains for marathons. Quinn’s first novel, The Fall, was an award-winning finalist for the 2013 International Book Awards.