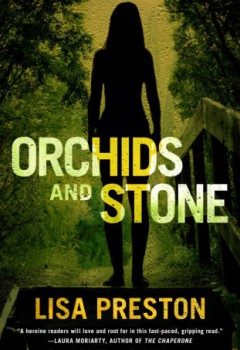 Many thriller writers come to the business after living extremely interesting and sometimes dangerous lives—Lisa Preston happens to be one of them. Having worked as a paramedic and police officer (including undercover work and as a hostage negotiator), Preston has encountered more than her fair share of predators and killers, and sadly, also of victims. A love of mountain climbing and the outdoors has afforded her the opportunity to spend much of her life in Alaska and the Northwest, where she currently resides on a few acres with her husband.

With a background like that, perhaps it’s fitting that Preston’s debut, ORCHIDS AND STONE, is about a heroine, Daphne, who finds herself getting involved in another person’s crisis—small actions at first, and then increasingly bold interventions, until Daphne finds she’s in too deep, fighting not only for a stranger’s life, but also her own.

Described by reviewers as “gritty and powerful” with a “nail biting climax”, ORCHIDS AND STONE is a compelling first book from a promising writer. Preston took some time off the mountain to chat with The Big Thrill about her debut and what readers can expect from her next.

We all wonder how we would react when encountering a situation where we can choose to intervene or, mind our own business and walk away. How did the story develop for you, and did a particular experience act as a catalyst?

There are numerous situations I’ve encountered in my careers where a stranger giving or not giving aid made all of the difference in how the scenario unfolded. There are also regular news stories about someone in desperate trouble who could have been aided by a stranger. Most people have not had the job of stepping in to help resolve someone else’s crisis, so I was interested in what experiences it might take to compel a person to take action when given a hint of a stranger’s catastrophe.

One reviewer describes the protagonist, Daphne as “a strong central character, complex and fundamentally stunted by tragedy in her life.” Tell us about some of this complexity.

The resolution to a criminal case has a fundamentally different feel to the victim, the victim’s family, the law enforcement agency, and the perpetrator. Consider three different case statuses: closed-arrest, closed-exceptional clearance, and suspended. The first is what you’d expect, the second usually means the suspect is no longer alive (and has a very different feel if the suspect’s death was due to accidental trauma, suicide, homicide, or medical reasons), and the third is locked in a terrible combination of hope and hopelessness because the law enforcement agency—and the family—need a new lead to develop. Sometimes, survivors’ lives end up matching the case status of “suspended” and I wanted to explore that dynamic. So many decisions—even passive choices—are guided by past experiences.

Daphne faces a sociopathic couple—true baddies perpetrating crime on vulnerable people. And as this book is what might be called a domestic thriller, there are other conflicts in the protagonist’s life. Friction with those characters can sometimes make them seem like additional antagonists, even though there are familial connections.

Is there symbolism in the title?

ORCHIDS AND STONE has multiple symbolic references, but—although I’m willing to discuss this great question with book groups that want to Skype or otherwise connect—I probably shouldn’t give the meanings away quite yet.

What is “bystander syndrome”? From your experience as a paramedic and cop, is there any “best practice” way to respond when we encounter somebody in trouble?

Bystander syndrome is when people who could help another person do not take action. There are numerous factors that influence this decision. Bystanders often expect someone else to do something about the situation unfolding in front of them. They may be afraid of making a mistake. They may be unsure about what to do. It’s interesting to observe that with a greater number of people watching, the odds of one of them helping actually diminishes.

Every scenario is different, so there is no one best way to respond. People have different levels of comfort, and a willingness to step beyond one’s comfort zone can vary due to countless factors—that’s understandable. But generally, if we can help someone who needs help, we should.

Before writing your debut thriller, you penned a number of advisory books on horses and pets. Tell us about the two racehorses you and your husband rescued.

Oh, they were marvellous fellows, one descended from Citation, the other a Tom Rolfe great grandson. Beautiful, noble, kind—and they lived into their twenties. Both became trail horses and we enjoyed a lot of miles and companionship. During the years they were aging, I added a youngster to the herd, an untrailed, half-Akhal Teke filly. One of the Thoroughbreds had lived out his years by the time she was grown up enough to seriously ride, so I was happily back down to two horses, but the other guy was aging fast. Horses shouldn’t live alone—they’re very social animals. We found a second half-Akhal Teke a couple of years ago. Now both of my retired racehorses have died and I have these two smart, strong Teke bravehearts. One carried a running buddy (Jenn Shelton) and me to the top woman-woman title at the Ride and Tie World Championship last year, and about a month later, finished Tevis, the classic 100 mile/24-hour ride across the Sierra Nevada mountains.

Has fiction been sort of a catharsis in terms of some of the experiences you’ve had?

Definitely! In a novel, I can make things turn out for the better. I can bring together people from different scenarios and I am able to explore unanswered questions—although I realize, as is strongly pointed out in this novel, that some questions do not have good answers.

How did you go about seeking to be published? Did you have many rejections? Consider self-publishing?

One, I queried a star agent, he almost immediately asked for the full manuscript, emailed me within a week or so to say he was still reading and enjoying it, soon scheduled a call in which he offered representation, and a few weeks later called with a nice multiple-book deal from a very enthusiastic publisher that presented enough cash to outright replace my old car. Said car had stranded me several times.

All true. In less than a year, I went from sending a query to an ARC in my hand, driving a bitchin’ new car instead of one with 160,000 miles on it.

It’s also true that he is my sixth literary representative, which makes me sound a bit like a girl who sleeps around. As my stellar agent observed on the call in which he offered representation, “This is not your first rodeo.”

In the last decade-plus of my path to being a novelist, I’ve had hundreds and hundreds of rejections, but I wanted a publisher who was really going to get behind my work. Self-publishing did not interest me. I’d written well over a million words of coherent stories by the time I got here. When something didn’t work, I wrote something else. I rewrote. I got as good as I could. When it wasn’t good enough, I took some time off, riding and running thousands of miles of backcountry trails. Here’s the deal: it’s not the writing, it’s the rewriting. Make it better. I kept at it.

You’re right about writing being a sedentary job. How much time would you devote to writing – do you write daily? Certain times?

If I don’t write, I usually have meditative trail time during which I’m working on character nuances or plot problems. The weather dictates my schedule to a certain extent. If it’s cold out and the conditioning schedule indicates my horse needs 20 miles, then I ride early in the day so she can dry out before the sun sets, bringing colder weather. I may write very early and again after I’ve taken care of her. If I’ve been writing well but there are only a couple of hours of daylight left, my dog’s going bananas, and I need a ten miler, we’ll go run the trails for an hour or two and I do a late-night write.

I can see a series character in the making here—if she survives the climax. Would it be giving too much away to tell? Are you onto the second novel yet?

The novel I’m working on now is stand-along suspense, while ORCHIDS AND STONE is a stand-alone thriller. However, different characters have a few things to say. A couple of them are trying to worm their way into other stories. They may succeed. My editor and I have discussed a mystery series as well. 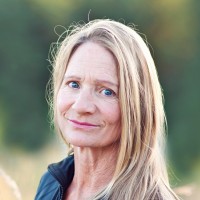 Lisa Preston needed one more semester to graduate high school when she moved to Alaska and started mountain climbing. Climbing left her wanting strong first-aid skills. She signed-up for an Emergency Medical Technician course. The class included ride-alongs on the Fire Department’s Advanced Life Support ambulances, which exposed her to the rewards of helping people in crisis. She moved to Oregon for training and was soon back in the Frozen North, pulling 24-hour shifts as a paramedic. “Paramedicine is physical and autonomous and demanding and technical. I loved it.” After a number of years, she transferred to the Police Department. Her second career started with the position of street officer and she still claims it is the most demanding job in law enforcement. In time, she became a detective, working in the Vice unit and later in Crimes Against Children, with a special assignment as a Hostage Negotiator. She went back to the street as a sergeant, and eventually returned to investigations, supervising Internal Affairs. “All of those years in emergency services made the city a map of memories, many of them very sad. I wanted to move . . . a couple of thousand miles.” She and her husband relocated to the Evergreen State and adopted two former racehorses from a rescue facility. She turned to writing, working on both mysteries, suspense and thrillers as well as mainstream novels. She also began competing in the obscure sport of Ride and Tie, a back country trail race that combines running and riding, covering distances of 20-35 miles. Right now, she is probably writing, riding, running or sleeping.