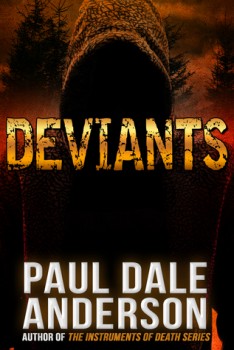 Mark Wynn is a former homicide detective who lost his job and pension after he tracked down serial killer Brian Russell and killed him in cold blood out of revenge for his family being brutally murdered. Mark spent two years in prison and is now out on parole. When Mark’s neighbor is murdered and dismembered in her apartment by a serial killer known as “the cutter,” Mark tries to track down the killer, even though he is no longer a cop. Mark’s ex-partner, Mike Nelson, and the new head of homicide, Aaron Lester, tell Mark to stay out of it, but Mark can’t. Mark is an ex-con on parole, and if he even touches a gun he will go back to prison for the remainder of his twenty-year sentence. With only his wits to aid him, Mark attempts to thwart the killer’s plans to attack again.

DEVIANTS is available from Amazon.