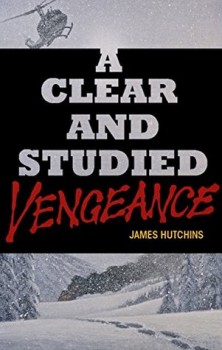 Johnathan ‘Sin’ Mallen is an ex-assassin for the British Government, damaged both physically and mentally by the mission that left his wife dead. As he struggles to piece his life back together, his personal concerns are swept in to a terrorist plot of international scope.

An action adventure that begins and ends in the snowy Wyoming mountains, but detours through Europe and the middle-east, bringing together the intimacy of hand-to-hand combat with the high-tech gadgetry of modern warfare. The lines between government agent, mercenary and terrorist are blurred as the action intensifies and the question is posed: Who gets to decide if killing is justified?

A CLEAR AND STUDIES VENGEANCE is available from Amazon.

James Hutchins grew up in the United Kingdom but now makes his home in the San Francisco Bay area. A Clear and Studied Vengeance was begun in a clear and considered moment almost twenty years ago and has been revisited numerous times before arriving on Amazon in the spring of 2016. When not writing, James Hutchins makes a living as a scientist working as a problem solver on numerous eclectic projects for the Federal government. He has interests in military and maritime history and over the years has dabbled with martial arts, weapons and photography but his favorite thing is to sit in a comfortable chair with a good book and a cup of tea.

The Forbidden Relic by Jeanne D'Août