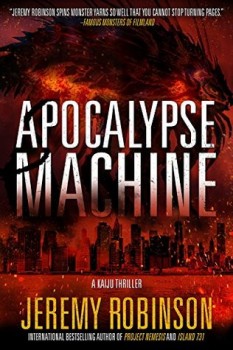 THE HUMAN RACE STARTED THE SIXTH MASS EXTINCTION ON EARTH.

A chain of subglacial volcanoes erupt in Iceland. The melting ice floods the countryside. Poisonous gas descends on Scotland. A tsunami devastates the Norwegian coastline. An ash cloud rises into the atmosphere, blotting out the sun across Europe, ushering in a new Ice Age. Dozens of nuclear power plants, flooded by ocean water, experience meltdowns. Millions perish. Many more are displaced. All on the first day.

On the second day, a series of earthquakes moving in a straight line, reveal the presence of something massive, walking across the landscape. Concealed by a thick, radioactive ash cloud, the ‘aberration’ heads west, toward Russia.

Abraham Wright, a science writer for Modern Scientist, who wants nothing more than to be reunited with his family, finds himself at the center of the United States’ response to the crisis. Under his new title as Assistant Science Advisor to the President, Wright is sent to Europe with a team of Army Rangers, where he uncovers the truth about the ancient behemoth laying waste to the world: there have been five mass extinctions on planet Earth, and the aberration has been present at each.

On the third day, the world fights back.

Separated from his family by continents and oceans ravaged by countless disasters and populated by strange new life, Wright struggles to survive in an evolving world. Hoping to uncover the key to mankind’s redemption, he fights for answers, and to reach his loved ones—before the human race’s extinction.

THE APOCALYPSE MACHINE WILL FINISH IT.

Jeremy Robinson returns to the Kaiju Thriller genre he popularized with the largest Kaiju to ever appear in fiction: the Apocalypse Machine. Bursting with all the epic action, desperate struggle and complex characters that readers have come to expect, Robinson takes the world to the brink once more, pitting humanity against the greatest threat he has yet to conjure, and asking the question: Does humanity deserve to inherit the Earth, or is our time up?

APOCALYPSE MACHINE is available from Amazon.

JEREMY ROBINSON is the international bestselling author of fifty novels and novellas including MIRRORWORLD, XOM-B, ISLAND 731, SECONDWORLD, RAGNAROK, PROJECT NEMESIS, THE ANTARKTOS SAGA and the exciting Jack Sigler thriller series. His novel PROJECT NEMESIS, is currently being adapted as a comic book series, and his Jack Sigler thrillers were recently optioned for film. Robinson is also known as the #1 Horror writer, Jeremy Bishop, and the master of post-apocalyptic fiction, Jeremiah Knight. His novels have been translated into twelve languages. He lives in New Hampshire with his wife and three children. For more on Jeremy and his pennames, visit: www.bewareofmonsters.com