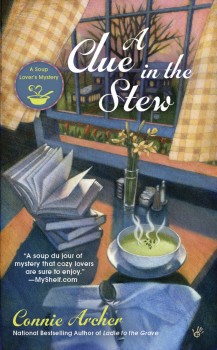 Connie Archer describes her path to a writing career as “somewhat sideways.” Her first love was acting, and from childhood, when she first heard a soap opera on the radio, she set her sights on screen and stage. Although she pursued a degree in Biology and another in English Literature, she spent most of her adult life as an actress, and never imagined she’d be a published author.

The reality of being an actor, though (especially in television), is that most jobs aren’t that exciting. One day, Archer found herself on set, bored out of her skull. This creative frustration inspired her to try writing. She’d always been a huge fan of mysteries and thrillers, so she gathered her courage and attempted to write one. But books are like potato chips; you can’t write just one. Now unveiling her fifth cozy mystery, A CLUE IN THE STEW, Connie agreed to chat with The Big Thrill about her path to publishing.

What gave you the idea to center the series on a soup shop?

I wish I could say this brilliant idea occurred to me all by myself. I mean what could be more bucolic than Vermont?  Or cozier than a soup shop?  But it happened this way—I finished my first book and was very lucky and blessed to find a wonderful agent, who shopped it around. I wrote two more books in that series, but a couple of years passed with no takers, and one day my agent called and asked, “How would you feel about work for hire?”

And that was for the Soup Lover’s series from Berkley Prime Crime?

That’s right. I think my agent thought of me because she knew I’d grown up in New England, Boston actually, and I do love to make soup. I hadn’t read a lot of cozy mysteries, so I was nervous about the parameters and what was expected. But I do know New England, and thought the series would be great fun to write.

Each book has several recipes in it. Where do the recipes come from?

Some are ones I’ve always made and some are revisions of classics. Don’t laugh, but I had no idea I was supposed to provide the recipes! About a week after I submitted the first manuscript, my editor wrote and asked, “Ummm, are you going to send us some recipes?” So I scrambled around and emailed some of my favorites to her. I was thrilled when Berkley Prime Crime came up with the idea of The Cozy Cookbook and included some of my recipes and excerpts (where the characters talk about what they’re cooking.) And I was doubly thrilled when one of my soup recipes was accepted for The Mystery Writers of America Cookbook!

Tell us a little bit about Lucky, your main character

Her given name is Letitia. She’s always been a tomboy and never felt the old-fashioned feminine name suited her. She does have a bad temper and a great right hook, so her grandfather Jack named her after his favorite Navy boxer, Virgil Lukowski—i.e., Lucky.

Lucky’s got a big heart, and she’s a bit of a pitbull when it comes to solving problems. Her greatest strengths are her determination and willingness to take risks. Her greatest flaws are her stubbornness and lack of fear. Maybe they’re the same qualities. I think every protagonist represents the best part of a writer’s psyche—the person we’d like to be, the person we wish we were.

What was the inspiration for this particular book?

Well, I was staring at a blank page on the monitor and wondering what could possibly happen next in the village? I’d already had a tourist murdered, a native son coming home and becoming the catalyst for a war of revenge, and a band of Scottish Gaelic-speaking travelers arriving in town. This time, I felt bereft, nothing was occurring to me. So I just started mulling over the possibilities and thought, huh! What would happen if a famous mystery writer decided to visit the village? Why would she visit? And what (secret) connections could she possibly have there? So that’s where this idea came from.

With such an intriguing cast of supporting characters, do you have a favorite?

I genuinely love many of them. But my favorite would be Jack, Lucky’s eccentric grandfather who tells time by the bells. He’s an amalgam of my dad, who had died a few years earlier, and my ex-father-in-law, a true character to put it mildly, who really did tell time by the bells, and called the floor the deck, and the walls the bulkhead.

How would you describe your writing process? Pantser or plotter?

I think both approaches are valid and necessary. The “pantser” is the creative part that lets ideas flow and the ‘plotter’ part is the critical/editorial side. I had very tight deadlines with this series and I discovered the best way for me was to start with an outline, like the framing of a house. Once I have that figured out, I can “see” where more tension is needed, or more action to keep the momentum of the story going. Where to lay out red herrings and clues, to be fair to a percipient reader. Outlining has saved me a lot of time and backtracking and confusion.

Oh, lots of times. Again, I’ll turn to my outline and hope something pops into my brain. The important thing is to keep writing, even if it’s dreck and has to be deleted later.

What advice would you give to aspiring writers?

Don’t think you can’t do it. You can. You just have to ignore the little voices that tell you you’re not good enough. Just keep writing! And reading. Reading’s very important.

What’s next? Will we see more of Lucky?

Sadly, A CLUE IN THE STEW will be the last of this series. I’ll miss Lucky and Jack, but as everyone in the industry is pretty much aware, since the Penguin Random House merger, quite a lot of the Berkley Prime Crime series will be ending. Mine is one of them. However, I’ve enjoyed every single minute. Berkley has been an absolutely wonderful publisher, and I wouldn’t trade my time with them for anything in the world.

Yes, a little plug here. I’m very excited that my new series, the Zodiac Mysteries, has been picked up by Midnight Ink. The Madness of Mercury will be released on June 8th.  I lived in San Francisco during the time that Jim Jones and his People’s Temple became so powerful, and I’d thought about using this somewhat dystopian theme in a story for a long time. In Madness, Julia Bonatti, a San Francisco astrologer, becomes the target of a power-hungry preacher who will go to any lengths to quell the voices of those who speak out against him. Julia has a newspaper advice column and she does speak out, becoming one of those whom the preacher believes is an “abomination unto the Lord.” The new website for this series is www.conniedimarco.com. I hope the readers who love the Soup Lover’s series, will give Julia and the Zodiac Mysteries a try.

Connie di Marco, writing as Connie Archer, is the national bestselling author of the Soup Lover’s Mystery series from Berkley Prime Crime. The fifth in the series, A Clue in the Stew, will be released April 5, 2016. Some of her favorite recipes can also be found in The Cozy Cookbook and The Mystery Writers of America Cookbook.

To learn more about Connie, please visit her website.