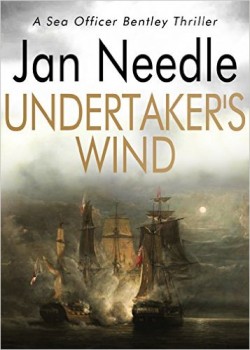 With the ‘Biter’ wrecked off the shores of Jamaica, full of Captain ‘Slack Dickie’ Kaye’s looted treasure, Lieutenant Will Bentley is forced into the brutal and rapacious world of the English sugar barons and their viciously repressed slaves.

Sailing back to Port Royal in an open boat, he brilliantly cuts out a mysterious French brig from a secret bay, but his hopes of recovering his lost honour are blighted by the news that Deb Tomelty, his beloved ‘Spithead Nymph’, has been held responsible for the death of a leading planter. Unless she can escape into the hinterland, she will undoubtedly be hanged. And Will is meant to hunt her down.

In Needle’s fourth William Bentley adventure, the young Sea Officer finds himself in the midst of a rapacious war between treasure-seekers, escaped Maroons intent on killing their oppressors, and the brutal force of white planters with an unquenchable lust for money. The struggle is on land and sea, and involves soldiers, sailors, desperate and determined women, and prisoners who have broken out from jail.

UNDERTAKER’S WIND is available from Amazon.

You can read Lynne Constantine’s interview with Jan in The Big Thrill here:

The Bonus Boys by Jan Needle

Jan Needle writes many different sorts of thriller, many of them noted for an unflinchingly examination of viciousness and cruelty. From World War II through the sub-cultures of drugs and gang crime, his books have attracted great critical acclaim, with his first novel about the Royal Navy in Nelson’s time, A Fine Boy for Killing, described by one critic as ‘Jack Aubrey with the gloves and rose-tinted spectacles torn off.’ As well as the Bentley books, there are novellas about Charlie ‘Craven’ Raven’s adventures, and a book about Bonaparte on St Helena, Napoleon – The Escape. He was raised in Portsmouth, on England’s South Coast, and the sea – and writing about it – is his passion. He is halfway through a series on Nelson.

The Torch is Passed - A Harding Family Story by Bill Powers

Saved By The Marine by Denise A. Agnew