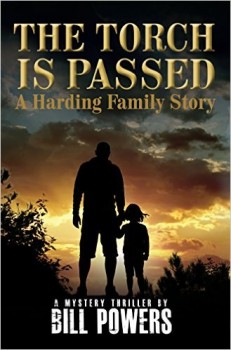 First there was The Pharm House, Finalist in the Medical Thriller category of the 2014 National Indie Excellence Awards, where readers met Nicholas Harding and his daughter, Andrea. Now comes the second Harding Family story. In the exciting new thriller, The Torch is Passed, Andrea has just graduated college and her world is turned upside down when her father, Nicholas, and her uncle, Michael, are shot in a surprising and puzzling attack. As the only family other than her paternal grandmother, it falls to Andrea to not only investigate who would want to kill her father and uncle, but also to oversee Harding Industries.

The youngest Harding soon finds herself surrounded by a bevy of intriguing new friends and helpers after she is also violently attacked, forcing her to kill both would-be assassins. Suspicion is cast on a short list of family friends and colleagues, including Don Marshall, with a shady past including an incident that also involved Andrea’s father. Then there is Marcus Ricci, widely believed to have ties to the New Jersey mob. Also on the suspect list are the Oakes brothers, Carlton and Jefferson, who run Oakes Industries along with their silent partner and cousin, New Jersey state senator Schuyler Colfax. They recently made a seemingly irrational attempt to purchase Harding Industries and were rebuffed by Nicholas.

Along with her new allies, including an abrasive, but loyal, attorney and an eccentric southerner with more money than God and an intriguing background in international espionage, Andrea urgently seeks answers why anyone would want to kill her entire family— grows up along the way and seeks her revenge.

THE TORCH IS PASSED is available from bookbaby.

He earned his PhD in Toxicology from the University of Cincinnati, and worked in pharmaceutical Research & Development for twenty-six years before changing his focus to writing the Harding Family mysteries.

Bill’s parents were both teachers who stoked his voracious childhood love for words and stories. He is married, with one adult child, and has moved away from the corporate world to focus on his writing career.