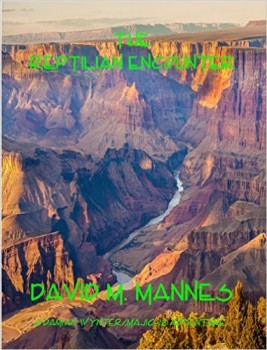 This fast, paced action-packed, harrowing action-adventure-sci-fi novel features Daiman Wynter, an agent for the clandestine black agency known as Majic-12. When a restricted site is breeched and a 4,000 year old flying saucer goes missing, it’s up to Wynter, Michelle Martin and their extraction team to retrieve it. Crossing into a parallel earth where Reptilians evolved into a humanoid species, the team finds danger and death at every turn.

THE REPTILIAN ENCOUNTER is available from Amazon.

David M. Mannes is a Cantor-Educator and a member of the American Conference of Cantors. He has served congregations in the United States and Canada. He is also former educational film producer/director and scriptwriter. He was nominated in 1990 for best non-dramatic script in the Alberta Motion Picture Industry Association (A.M.P.I.A.) awards for “Writing-on-Stone” featuring actor Leslie Neilson which he co-produced for Alberta Parks. David is the author of The Reptilian Encounter, Scarlet Justice, and Creature Feature among others. His new humorous coming-of-age novel, The Cantor’s Son, will be published in 2016. He has had a long time interest in UFOs, paranormal and unexplained phenomena, as well as, history. David is also a member of the Writer’s Guild of Alberta. David Mannes is married and lives in Edmonton, Alberta, Canada.

Lessons in Love by Charlie Cochrane