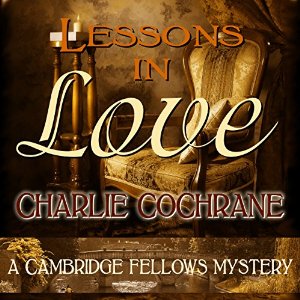 Jonty Stewart is handsome and outgoing, with blood as blue as his eyes. When he takes up a teaching post at the college where he studied, his dynamic style acts as an agent for change within the archaic institution. He also has a catalytic effect on Orlando Coppersmith.

Orlando is a brilliant, introverted mathematician with very little experience of life outside the university walls. He strikes up an alliance with Jonty and soon finds himself heart-deep in feelings he’s never experienced. Before long their friendship blossoms into more than either man had hoped.

Then a student is murdered within St. Bride’s. Then another…and another. All the victims have one thing in common: a penchant for men. Asked by the police to serve as their eyes and ears within the college, Jonty and Orlando risk exposing a love affair that could make them the killer’s next target.

LESSONS IN LOVE is available from Amazon and Audible.

As Charlie Cochrane couldn’t be trusted to do any of her jobs of choice—like managing a rugby team—she writes. Her favourite genre is gay fiction, sometimes historical (sometimes hysterical) and usually with a mystery thrown into the mix.