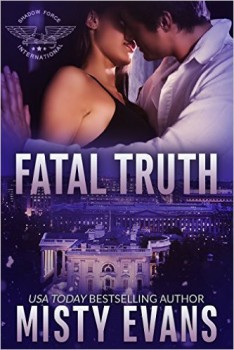 She’s an investigative reporter who lives to uncover the truth.

Feisty television host Savanna Bunkett exposes government cover-ups on her award-winning show, The Bunk Stops Here. When she digs into a rumor about a top-secret government project that’s producing “super soldiers” for the president, she suddenly finds herself on an assassin’s hit list.

He’s the man who knows the truth.

Navy SEAL Lieutenant Trace Hunter is the only soldier to survive Project 24. After refusing a direct order from the president, he was branded a traitor, and his career imploded after the sexy reporter turned him into a national headline. He now works undercover for Shadow Force International, a secret group of former SEALs helping those who have nowhere else to turn, using his enhanced skills to fight for justice and protect the innocent. His first assignment? Protect Savanna from the one man who wants them both dead—the president.

One wrong move and they’ll be silenced forever.

Helping Savanna is the last thing Trace wants to do, but her unwavering determination to expose the president’s dark truth matches his own. She’s his one chance to set the record straight, and he’s her only chance at survival. When their mutual enemy closes in, can they put the past behind them and trust each other? Even if it means losing their hearts in the process? Or will secrets, lies, and forbidden passions cost them everything?

FATAL TRUTH is available from Amazon, Amazon UK and iTunes.

USA TODAY Bestselling Author Misty Evans has published over thirty novels and writes romantic suspense, urban fantasy, and paranormal romance. As a writing coach, she helps other authors bring their books – and their dreams of being published – to life.

The books in her Super Agent series have won a CataNetwork Reviewers’ Choice Award, CAPA nominations, the New England Reader’s Choice Bean Pot Award for Best Romantic Suspense in 2010 and the ACRA Heart of Excellence Reader’s Choice Award for Best Romantic Suspense in 2011. OPERATION SHEBA has been a military romance, action-adventure, and romantic suspense bestseller on Amazon.

Her Witches Anonymous series was dubbed a Fallen Angel Reviews Recommended Read. The Super Agent Series, Witches Anonymous Series, and the Kali Sweet Series have been on multiple Amazon Kindle bestsellers lists. Her culinary romantic mystery, THE SECRET INGREDIENT, and the first book in her Deadly series, DEADLY PURSUIT, are both USA TODAY bestsellers.

Misty likes her coffee black, her conspiracy stories juicy, and her wicked characters dressed in couture. When not reading or writing, she enjoys music, movies, and hanging out with her husband, twin sons, and two spoiled puppies. Learn more and sign up for her newsletter at www.readmistyevans.com. Like her author page on Facebook or follow her on Twitter.