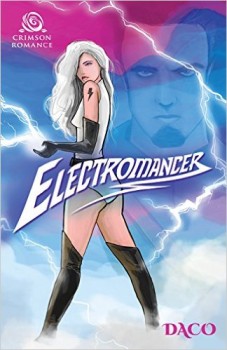 With a heart as pure as platinum and electricity at her fingertips!

Soaring like a falcon at the speed of light!

When arch villain Momo threatens to destroy the world with The Big Zapper – a weapon of mass destruction the likes of which has never been seen before – it’s up to Alexa Manchester and her new electricity-harnessing superpowers to stop him.

With a little help from her sexy chauffeur, Sigfred Sawyer, and some exciting encounters with the mysterious and handsome Blue Arrow, soon Alexa’s love life is charged up, too. And to defeat the seemingly invincible Momo, it might just take the naturally super power of love to save the day.

Offering all the Kabam! Pow! Zap! of beloved comic book sagas with the beating heart of a love story, this over-the-top, genre-blending send-up is sure to delight superhero fans and romance readers alike.

ELECTROMANCER is available from Amazon, Barnes & Noble and Kobo.