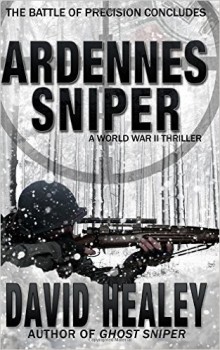 Winter 1944. As German forces launch a massive surprise attack through the frozen Ardennes Forest, two snipers find themselves aiming for a rematch. Caje Cole is a backwoods hunter from the Appalachian Mountains of the American South, while Kurt Von Stenger is the deadly German “Ghost Sniper.” Having been in each other’s crosshairs before, they fight a final duel during Germany’s desperate attempt to turn the tide of war in what will come to be known as the Battle of the Bulge. Can the hunter defeat the marksman? Even in the midst of war, some battles are personal.

“In Ardennes Sniper, David Healey continues the duel he began in Ghost Sniper, once again capturing the science and cunning of those who wage war one well-aimed shot at a time.” —William Peter Grasso, author of the Jock Miles WW2 series

ARDENNES SNIPER is available from Amazon and Barnes & Noble.

“Healey writes the way a sniper works, in close. He knows his craft, his writing is clean and, like a good shooter, he stays out of the way. Healey’s in command, too, of his landscape, the battle of the Bulge, told from both cold and desperate sides of the fight. Ardennes Sniper will transport you to the place, the time, the struggle that was the Bulge, with a novel that has the crosshairs dead center on a well-told tale.”
—David L. Robbins, best-selling author of War of the Rats and The Devil’s Horn

ITW member and Big Thrill contributing writer David Healey has written several mysteries and thrillers, including “Sharpshooter” and “Ghost Sniper.” He is also the author of the non-fiction books, “1812: Rediscovering Chesapeake Bay’s Forgotten War,” “Great Storms of the Chesapeake” and “Delmarva Legends & Lore.” His articles and essays have been published in many magazines, including American History, The Washington Times, Blue & Gray, Running Times and Maryland Life. When not writing, he enjoys hiking, working on his old house, and driving his family crazy by pulling over to the side of the road to read historical markers. Visit him online at www.davidhealeyauthor.com

The Woman Who Tasted Death by DG Wood

The Couple Next Door by Rick R. Reed