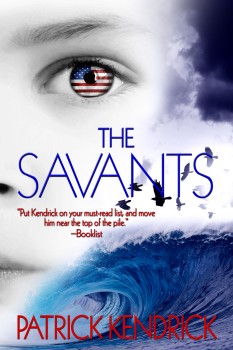 THE SAVANTS is Patrick Kendrick’s first foray into Young Adult thrillers. The book is a techno/political thriller and Kendrick usually writes gritty, crime sagas. But, the author tells us, it has one element common to all of his books: a conspiracy. He answered a few questions for The Big Thrill.

THE SAVANTS seems like a big departure from your other works, including the recently released noir thriller, Acoustic Shadows, released by HarperCollins this summer. Tell us how the book came about?

Honestly, the book came about because I wanted to write something my own teenagers could read. My first three books contain significantly graphic violence. I encourage reading among young people and often go to elementary schools to promote reading. I usually hand out comic books to inspire the children to read, many of whom have no other resource. But, given the nature of my work, I am not comfortable promoting my own books to young people. When I won the Florida Book Award for my first book back in 2008, I promised my sons I would write a book that they could read. THE SAVANTS was always a techno/political thriller but in the first drafts the characters were a little older and I could see myself going down the same path I usually do. I realized with the nature of the plot, characters using their intellect to resolve a catastrophic crisis, readers would have to be more flexible with their beliefs in wondrous achievements. Young adults are more willing to do that, to believe in things that are beyond their scope of normal learning. The book is about faith, believing in people who do not seem capable of extraordinary achievements, and believing in those forces in nature that are speaking to us if we only know how to listen. It’s a very positive message disguised in the form of a thriller. Young adults are not jaded yet and are more willing to accept miracles and believe in the underdogs.

Yes, the story’s main heroes are people who are typically outcasts, gifted but with undeveloped social skills. Can you tell us more about them?

Sure. Most of them are based on real savants, some of which I came into contact while doing my research for the book. James Tramwell is the ad hoc leader of the group, primarily because he is what is known as a functional savant, that is, he is able to go live on his own, go shopping, make a living by doing difficult translations, but his real gift is doing lightening calculations. He can process mathematical problems faster than a computer. He is actually inspired by Daniel Tammet, who is probably the most famous and successful savant living today. A man so brilliant, one is immediately awed by his gifts. Harvey Peet is loosely based on Kim Peek, who died a few years ago, but his capacity to recall everything he ever read—and he could read a book in minutes—was extraordinary. Etta Kim, the female in the group is based on several savants, one was an Asian girl from the nineteenth century and one is a young contemporary, Shajah Nandana, who is so gifted, it’s believed she may be able to read minds and predict things. And Jeremy Clemens is based on two savants, Alonzo Clemons and Stephen Wiltshire, who both have artistic abilities to sculpt and draw almost anything and Jeremy has that ability as well as incredible mechanical aptitude. Etta and Jeremy are “acquired savants,” that is, they suffered some sort of brain trauma, then acquired their skills. James and Harvey were born with their gifts.

Dr. Darold Treffert is arguably the world’s foremost authority on savants. I read his book on the subject, and reached out to him and he was kind enough to answer some questions for me. The idea of getting savants to work on a common project together was unique and has never been done in reality. So, I thought it would be a good place to start.

You’re a former fire fighter and special operations technician. Would you consider writing novels where the protagonist is a fire fighter?

I’m not closed to the idea but I’ve seen authors who did something else before they began writing novels about their former career and sometimes they get pigeon-holed into doing the same thing over. I didn’t want to do that and become the fire fighter who writes book about fire fighters. That’s too limiting to me. I’d rather be thought of as an author who just happened to be a fire fighter previously. It allows me to be much more flexible with my story choices. That said, the hero in my second book, Extended Family, was a fire investigator who assisted the FBI in tracking serial killers who torched their victims.

I’m working on several projects right now but one of them will be my first ghost/suspense novel and I’m psyched about that. It will include some of the experiences I’ve had training with the Army in the past few years. It’s incredible what people in the armed services do to protect this our country and most people are not aware of what they see beyond the evening news. 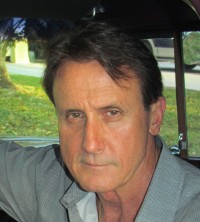 Patrick Kendrick is an award winning author of several thrillers, including: Papa’s Problem, a Florida Book Award and Hollywood Film Festival Award winner. Extended Family, which earned a starred review from Booklist. His newest crime thriller, Acoustic Shadows, was published by HarperCollins in June and is a Royal Palm Literary Award Finalist. The Savants, a sci-fi, political thriller is his first YA novel, and is published by Suspense Publishing. A former firefighter and freelance journalist, he lives in Florida close to the sea.