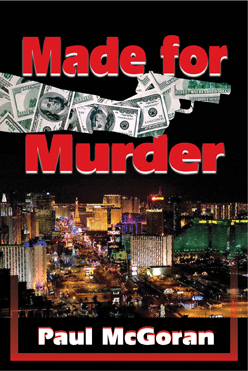 In writing his first novel, Paul McGoran wanted to create a noir thriller with fully developed characters. At the same time, he felt a need to turn the old femme fatale trope on its head. His protagonist had to be a woman, and her best-laid plans would be annihilated by an attractive, but deadly homme fatal.

Welcome to MADE FOR MURDER (New Pulp Press), a suspense thriller in the classic tradition that pits mercenary socialite Helena Swann against a lethal ex-con named Sam “Shoo-fly” Porter. When they meet on a flight from Las Vegas to San Francisco, their mutual attraction is palpable, but Helena tries to resist—she can’t quite bring herself to dump a rich and adoring fiance, Brad Styles.

Thus begins the see-saw of Helena’s emotions tilting her first toward Sam’s drive and sexual magnetism, then back toward Brad’s wealth and prestige. But a bible-spouting private eye comes along to disrupt the narrative. He attributes a double murder back in Las Vegas to Sam, who bolts—the start of a long odyssey leading to Miami Beach. In fear for her own life now, Helena flees in secret to relatives in Newport, Rhode Island—where MADE FOR MURDER’s climax takes place after more plot twists and two more brutal slayings.

What made you want to write this book? Did you start with plot, theme, or character?

MADE FOR MURDER started life as a screenplay treatment. When it dawned on me I had no one to pitch it to and no prospects of going to Hollywood, I put it aside. Later, I wondered if I might try it as a novel. It was then I asked myself what was driving me to tell the story. What stuck in my mind from beginning to end was the blind ambition and will to power of Sam “Shoo-fly” Porter, a stone-cold killer who nevertheless thinks he can make it into the top echelons of business and society.

Sam Porter doesn’t have the distinctive M.O. of a serial killer. His crimes come from frustration and rage. Besides, this is noir—there’s no real hero. The protagonist is Helena Swann, she’s the one under pressure, the one whose decisions drive the story. In Frankenstein, for instance, the focus is on the monster, but the doctor is the protagonist.

Does that mean Sam is a monster?

It’s a little more complicated than that, I think. Don’t forget that three women, two of them very good women, fall deeply in love with him. They see qualities that sometimes make you want to root for him.

I take it that Helena Swann isn’t one of the good women.

Her faults are right out there for all to see. She’s mercenary, duplicitous, unfaithful, and manipulative. But she’s no monster, either. Her emotions and ambitions drive her to grasp at everything she wants, and I think we sympathize with her deeply for that.

Who would be the ideal reader for MADE FOR MURDER?

What do you think it is about noir and hardboiled fiction that attracts you?

I believe they confront evil more fully than other genres of crime fiction. Both the protagonist and the villain in noir and hardboiled are tainted. To right a wrong, the hardboiled hero won’t hesitate to break the law. The villain, on the other hand, can be more consistent—his objective is evil, likewise his utter contempt for norms.

Is there any discernible difference between hardboiled and noir fiction?

Well, the hardboiled hero is usually a P.I. who wins the day. The essence of noir fiction is the power of the dark side. A noir protagonist more often winds up on the short end: wounded, broken, sometimes dead. Jack Bludis is an old school crime writer who summarized the difference as hardboiled equals tough, noir equals screwed.

In MADE FOR MURDER, you used chapter titles like “Most Men Are Gerbils,” and “Bodies In the Kitchen.” What’s up with that?

It was a fun thing to do. Noir can become dark to the point of suffocation—the chapter titles help to lighten the experience. For me as well as the reader.

When did you start to write fiction seriously?

Before beginning a novel, are you an outliner—or do you just start writing?

Outliner here. Nothing formal, I just try to develop the idea and characters in a kind of stream of consciousness fashion, taking pains to keep it chronological. The great thing about an outline is that it tells you what comes next. Which takes away one big excuse for not writing. And I don’t take it for scripture—when I go off course, I just follow where the characters lead.

Can you give me an example of that?

Sure. MADE FOR MURDER was supposed to end in San Francisco, but the characters took me to Phoenix, Austin, and Newport besides.

Are you working on another book?

Oh, yes. I’ve completed a novel called The Breastplate of Faith and Love, and I’m part way through another. I also have a volume of short noir fiction ready for publication called Paying for Pain.

What are those novels about?

Both of them feature a series P.I. named Stafford Boyle. The Breastplate of Faith and Love picks up the story in MADE FOR MURDER years later when several of the same characters think their lives are back to normal. It goes without saying they are sadly mistaken. 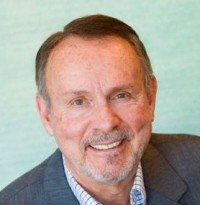 Paul McGoran lives in Newport, Rhode Island. In his lives before fiction, he was a laboratory technician, a Russian language interpreter for the U.S. Navy, a career marketing executive, a management consultant, and a day trader. As a writer of crime fiction, his inspiration comes in equal measure from spending way too much time watching black and white film noir, and reading way too many hard-boiled detective novels.

Woman With A Blue Pencil by Gordon McAlpine

The Kill Box: A Jamie Sinclair Novel by Nichole Christoff