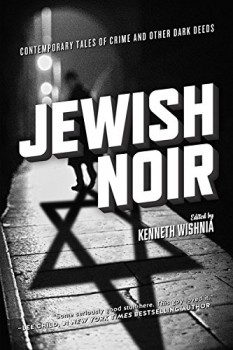 Some of today’s best-known crime writers have come together to create JEWISH NOIR, an anthology of new stories that examine the re-emergence of noir in Jewish culture.

Edited by Kenneth Wishnia, the book’s 32 compelling offerings tackle issues such as the long-terms effects of the Holocaust, sexual abuse in an insular ultra-Orthodox Brooklyn community, amoral  businessmen, and, much to Wishnia’s surprise, multiple stories on bullying.

“No less than three of the contributions focus on characters having been bullied for being Jewish,” he says.

The anthology is truly a diverse collection of work by an eclectic group of authors—some of whom aren’t even Jewish.

“This is a compilation of ‘not the usual suspects,’ ” Wishnia says, noting that among the stories by the more well-known authors, the anthology includes a few debut efforts, one vintage reprint, and a translation of a story originally penned in Yiddish in 1960.

At more than 400 pages, Wishnia admits, it’s a heady—but timely—book.

“We live in an age which parallels many of the conditions that gave rise to the first generation of noir writers—economic insecurity, corruption at all levels of government, and disillusion with the American dream, while those responsible for it all make millions and get away with murder.”

Despite the genre’s resurgence, Wishnia says these themes aren’t new. In fact, they date back to Biblical times. “To put it in rather simplified form, a majority of the world’s Christians are taught that if you follow the right path, everything will turn out well for you in the end. In Judaism, you can follow the right path and still get screwed (just ask Job). That’s noir,” he writes in the anthology’s introduction.

Or, for a more light-hearted description, Wishnia says, “If you’re not embarrassed by the cover, it’s not pulp fiction.”

While this is Wishnia’s first time in the role of editor, he’s no stranger to fiction. His novels and short stories have been nominated for or won several awards and distinctions.

But he can’t claim sole inspiration for JEWISH NOIR. The idea was conceived with the help of Reed Farrel Coleman, who unfortunately had to drop out of the project after landing another gig that featured a non-competitive clause. His story in the anthology was even penned under a pseudo-name.

Wishnia boldly took the reins on what he says ended up being a lot more work than he intended. What began as between 15 and 20 contributions bloomed to 32—it seemed everyone wanted on this unique noir revival project. There’s even talk of a second book, though Wishnia cautions that it might be a while before he can carve time out of his personal writing to take on another anthology of this magnitude.

“We hope this book gives readers an appreciation of Jewish noir,” he says, along with a shared celebration of the culture. “In a less enlightened time, people hid their identity. No one just discovers they have Catholic ancestry. Really, it’s only recently that we’ve been considered white—prejudices last a long time.”

To help tackle some of those prejudices, bring awareness to Jewish culture, and yes, to honor all that is noir, Wishnia and his co-writers have turned to the thread that often ties society together—the art of storytelling. 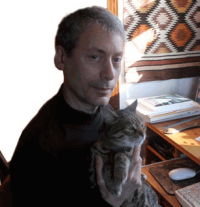 Kenneth Wishnia’s novels include 23 Shades of Black, which was nominated for the Edgar Allan Poe Award for Best First Novel and an Anthony for Best Paperback Original; Soft Money, a Library Journal Best Mystery of the Year; and Red House, a Washington Post Book World “Rave” Book of the Year. His short stories have appeared in Ellery Queen, Alfred Hitchcock, Queens Noir, Long Island Noir, Send My Love and a Molotov Cocktail, and elsewhere. His latest novel, The Fifth Servant, was an Indie Notable selection, a Best Jewish Book of the Year according to the Association of Jewish Libraries, won a Premio Letterario ADEI-WIZO (the Italian chapter of the Women’s International Zionist Organization), and was a finalist for the Sue Feder Memorial Historical Mystery Award, a category of the Macavity Awards. He teaches writing, literature, and other deviant forms of thought at Suffolk Community College on Long Island.

To learn more about Kenneth Wishnia, please visit his website.